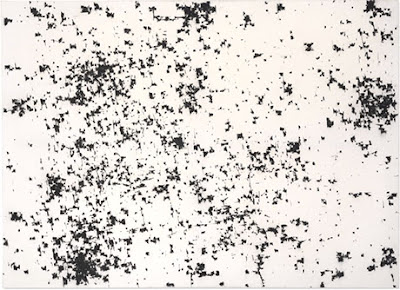 Desire Path is a contemporary exploration of gestural trace, repetitive form and the space that exists between the two, impelled by the drive within to mark a personal path. These new works by Andrew Vass and Nuala O’Donovan present a glimpse into the landscape of the inner self – the repetitions, retracing, constructions and layerings, which form the structure of our thought process.  Vass’s drawings plot the paths between vision and decision, creating an intricate matrix of trace, line, erasure and space. While O’Donovan’s complex sculptures develop form from the repetitive application of fractal scale. Both artists move between the space of their inner world and the space of the perceptual world, looking for the right place to take. 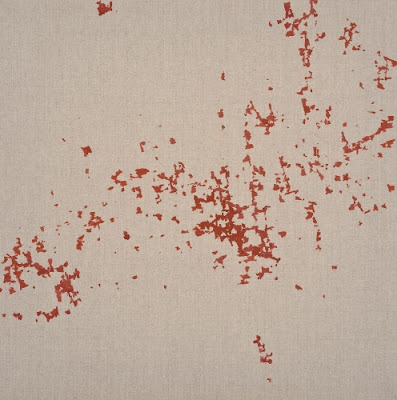 Red Drawing 5
Andrew: I had an idea for a title for the show, based on…a Radio 4 program, Word of Mouth http://www.bbc.co.uk/programmes/b05pn676. The program focused on different terms to describe aspects of landscape. I liked the word “desire path” which describes the most obvious route between points. Often cutting corners, insistent on instinct rather than municipal planning. Wikipedia states it can be used metaphorically as a route taken independent of authority, a creative act. I’ve been developing a project in response to a grass bank seen through a friend’s studio. It’s allowed me to view the work as a trace through the space! The red drawings are ink/acrylic on linen and paper. Jane Boyer curator: These works are exquisite in their agony. I'm just reading about Barnett Newman's Stations of the Cross, and I see a similar anguish of solitude in these works. The marks are utterly devoid of context, pattern, or cohesion. They are a presentation of dispersement, fragmentation and randomness. The red gives the marks a material solidity, which makes them read as fragments of some extinguished and disappeared whole. Their devoided presence is their power and their meaning. 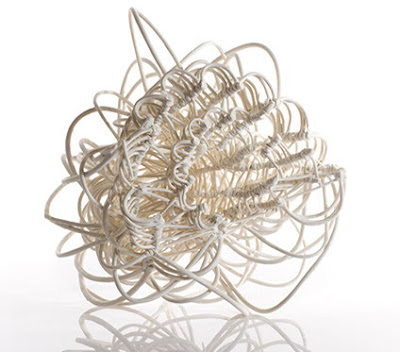 Nuala: My work is based on natural forms and natural forms are a progression rather than a static form. In order for this to be the case though the form has to be evolving but the forms that I make become static. They have similar qualities to fossils partly because of the ceramic material and partly because once fired they become frozen as moments in time. The pieces have a stillness, like shells and fossils, even though they capture evidence of energy in the variation of the scale of the
elements in the patterns. The evidence of energy is apparent in the making of the work, but it isn’t energy in itself. I think that there is a different dynamic apparent in gestural work which is of the moment and captures/communicates an explosive energy. The energy in my work isn’t gestural, it’s more compressed, the pieces describe the journey of the making of the work which is laborious rather than free. The pieces are bound by weight and gravity to the horizontal surface in contrast to the painted surface, freed by contrast and colour. The three dimensional qualities, such as depth, in a painting are open to interpretation by the viewer whereas my pieces are bound by the space that they occupy. I like the stillness in the work as they are an illustration of a journey, they hopefully suggest other journeys but in themselves they are complete and still. The material, porcelain, communicates fragility and brittleness, the forms may be Our text for Desire Path is going to diverge from its normal path. 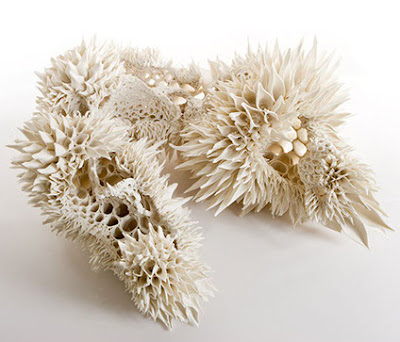