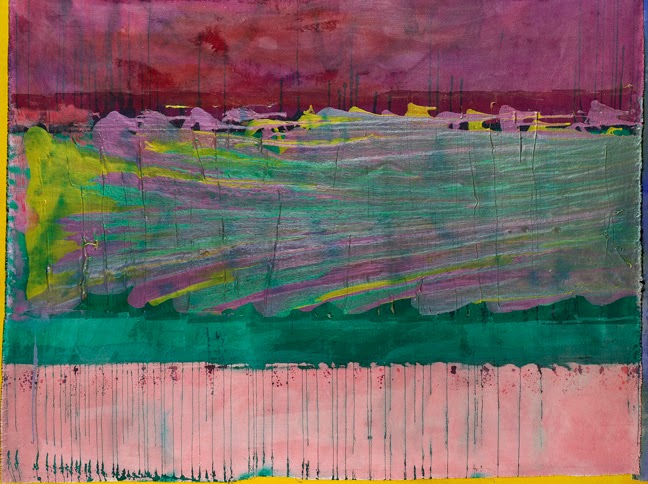 YellowL and Rowers 2013
Frank Bowling, who currently divides his time between London and New York, was born on 29th February 1935 in British Guyana and came to England in 1950. He was the first black artist to be elected to the Royal Academy, London, and he was honoured in 2008 with the Order of the British Empire (O.B.E.) for his service to art. In 2012, he was included in an important group exhibition at the Victoria & Albert Museum, London, and featured in a solo display at the Tate Britain, London. 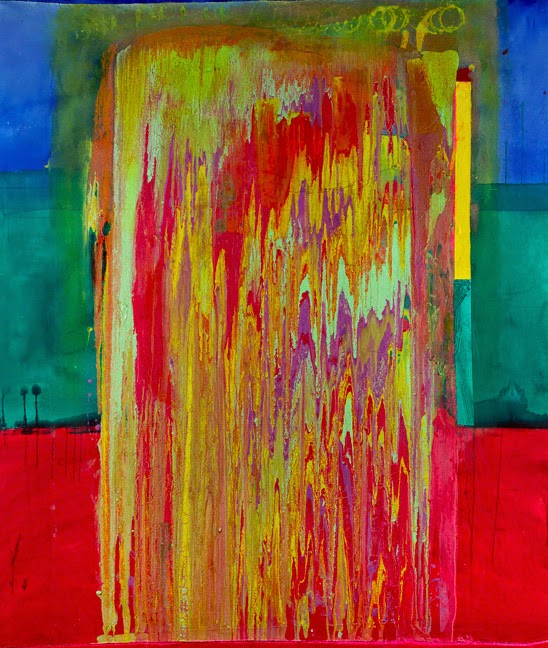 East gate with Iona 2013
"Bowling’s method consists of working on unstretched canvas, which he often cuts or reassembles, stapling and gluing parts together. At times, he folds and rolls up a work to be finished at a later time in a different place, encompassing the theme of temporality.  Receptive to new methods, he has developed many ways of pouring paint, including the use of a tilting board platform controlled by pegs, which enable him to determine the velocity of the paint’s downward movement." 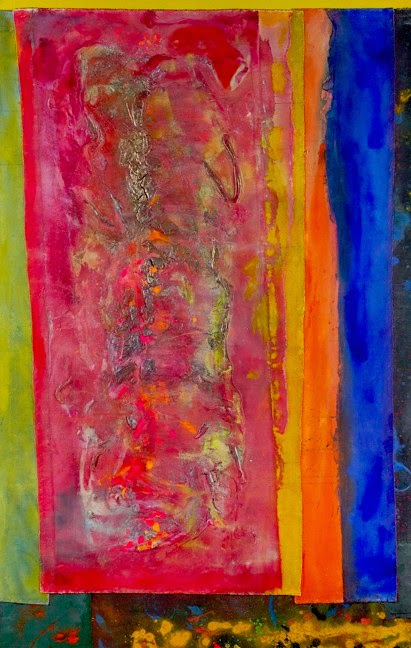 I enjoyed Stephen Heyman's article about Pierre Soulage in the New York Times.
“I paint by crisis,” Mr. Soulages said. “Sometimes it works, sometimes it doesn’t. If we know exactly what we are going to do before we do it we are not artists but artisans.” 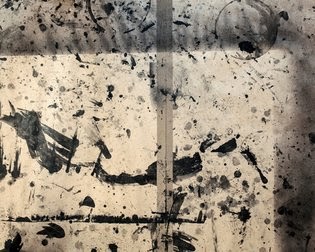 The floor where Mr. Soulages paints his canvases.CreditJohann Rousselot for The New York Times
Posted by Monk at Thursday, May 22, 2014 No comments: 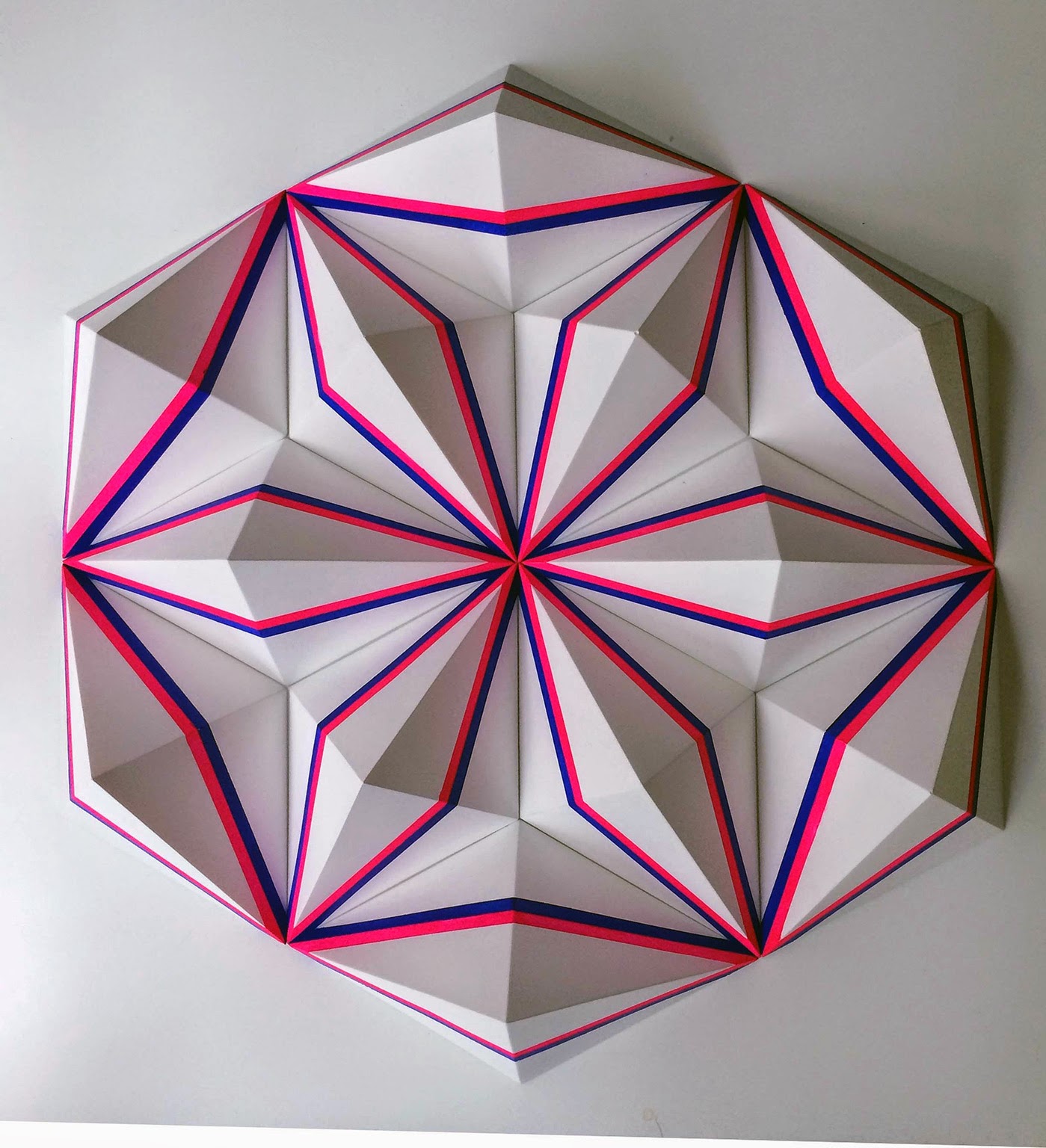 Zarah Hussain is inspired by complex patterns that emerge from simple repeating shapes and echo the natural beauty of the universe in all its’ timeless forms. Her new three-dimensional wall sculptures transform these patterns into clean, minimal structures precisely arranged to reveal new ways of seeing shadow, colour and light.
Here is one of Zarah's paintings: 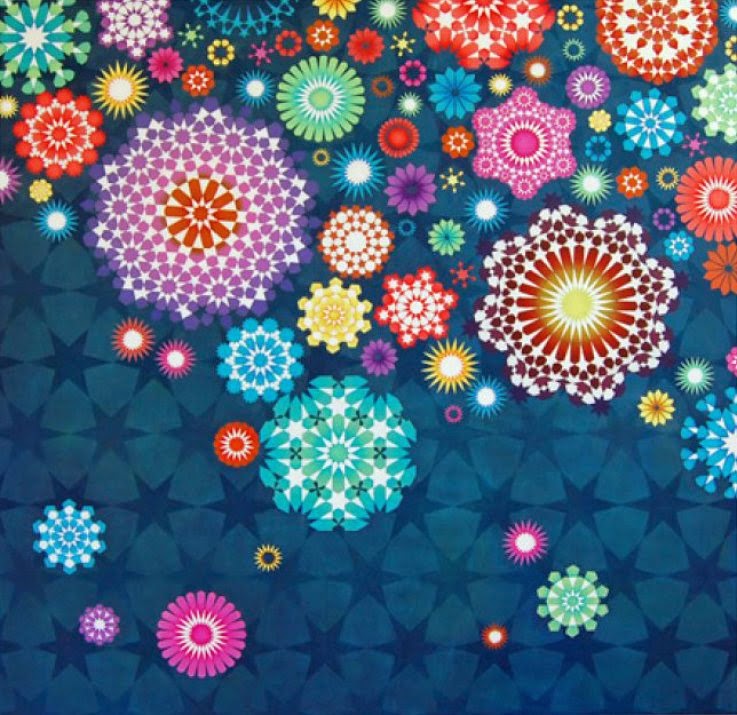 The Glass House, The Night and Vincent Fecteau

"The Glass House, built between 1949 and 1995 by architect Philip Johnson, is a National Trust Historic Site located in New Canaan, CT. The pastoral 49-acre landscape comprises fourteen structures, including the Glass House (1949), and features a permanent collection of 20th-century painting and sculpture, along with temporary exhibitions.

Sometime in the mid-1960’s, a rail-thin white plaster sculpture called Night (1947), by Alberto Giacometti, walked away from the Glass House and never came back.One of very few artworks ever displayed in the Glass House, Night’s rawboned figure was granted pride of place atop the Mies van der Rohe glass coffee table. Over time, the sculpture began to shed its outer layer and was eventually sent to the artist’s studio for repairs. But Giacometti died before the work was restored and the sculpture never returned. Neither repaired nor replaced, its absence still lingers; a Modern ghost.

In place of a traditional artist-in-residence program, Night (1947 – 2015) is instead a sculpture-in-residence program; an unfolding sculptural exhibition held in the same spot where Giacometti’s Night once stood. A series of contemporary artists will contribute works that contend with the legacy of Giacometti’s sculpture and Johnson’s architectural opus. On display for three to six months at a time, the sculptures in Night (1947 – 2015) will “disappear” after their run, making room for new work and new absences.
Although world-class painting and sculpture populate Johnson’s property, Night (1947 – 2015) is the first formal art exhibition to be held on-site. The slowly unfolding exhibition places Johnson’s collection in dialogue with contemporary sculptural practice while positioning the architecture itself – long a site of critical discourse – as both backdrop and collaborator.Night (1947 – 2015) is primarily comprised of never-before-seen works by a number of mid-career and established artists. Special attention will be paid to artists who grapple with themes raised by Giacometti’s vanishedNight -- themes that largely work in contrast to those of Johnson’s transparent temple. Works will explore unreliability, looping, curving, transparency, reflectivity, and doubt. Additionally, works will have a significant relationship to architecture and design.Artists will be selected and announced each year through the completion of the exhibition in 2015. Jordan Stein is the guest curator of Night (1947 - 2015)." 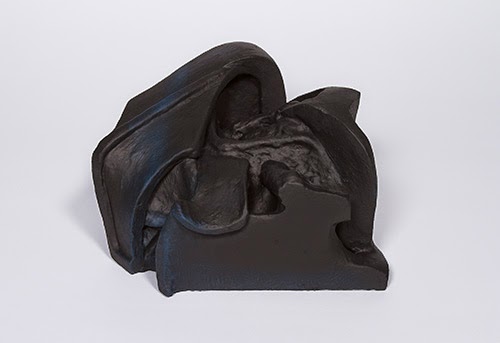 "Fecteau’s intuitive approach—well matched for the modeling clay he employs—confronts the crispness of the Glass House with a tangle of opaque folds, curves, and arches. Yet, like the house itself, the sculptures marry interior and exterior space, taking advantage of the medium's inherent dimensionality by offering endless perspectives on and through a single form.Inspired by this paradox, the Glass House will rotate all three works over the course of Fecteau’s nearly four-month presentation: a compressed model of the disappearing act that is Night (1947–2015)." 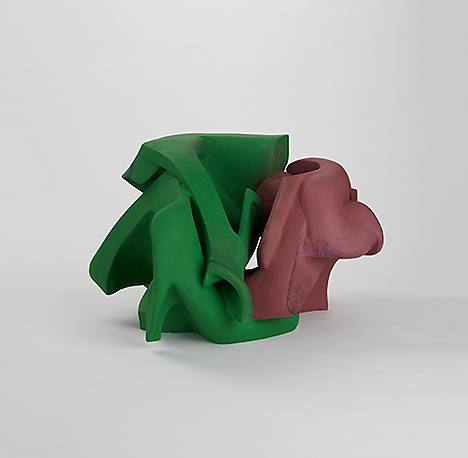 Peter Serkin in his younger days

From the New York Times piece by VIVIEN SCHWEITZER"It is often remarked that contemporary audiences have a greater appetite and appreciation for Modernist art than for Modernist music. But abstraction can be easier for the eye, than the ear, to absorb. A set of abstract shapes and colors can mesh into a mesmerizing visual whole, but the ear (or certainly my ear) struggles to process a series of notes and gestures that seem to have no connection to one another. Rigorous methods of composition can sometimes result in bafflingly disjointed sounds that resemble a nonsensical sentence." 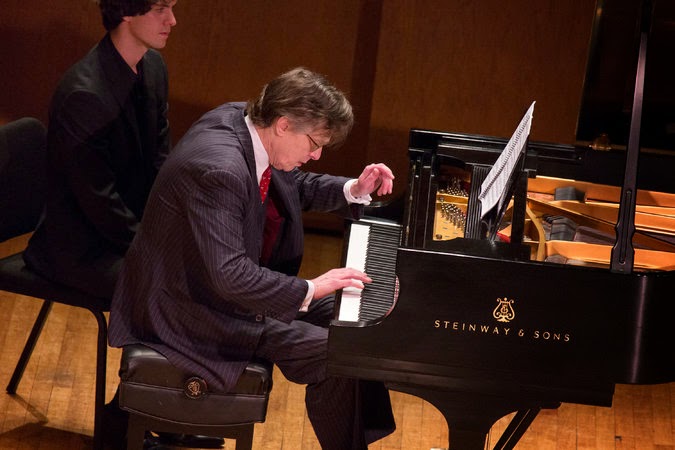 Richard Termine for The New York Times
“Is Beethoven really easier to listen to than Wolpe or Wuorinen?” These are examples but not played by Serkin.

Iowa Primate Learning Programme.
The lexigrams, abstract symbols representing words, that are used today by the bonobos at Bonobo Hope Sanctuary resulted from the early work by Dr. Duane Rumbaugh and the chimpanzee Lana at the Yerkes Regional Primate Research Center in Atlanta. Creating lexigrams and connecting them to a computer revolutionized ape language research and led to the establishment of the Language Research Center at Georgia State University. This development of nonspeech communication has also assisted people with learning disabilities. Today, the lexigram panels used by the Trust bonobosrepresent nearly 400 words. The interactive version is here. 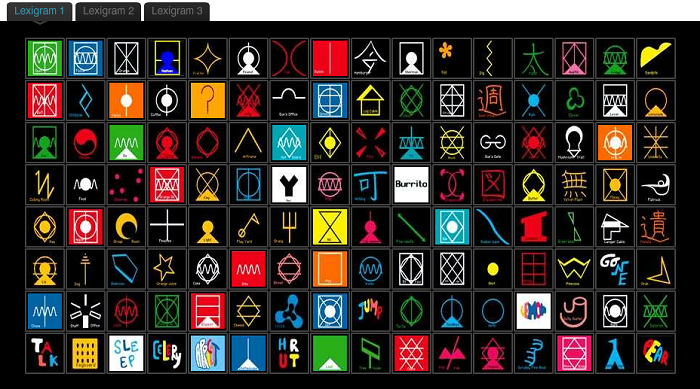 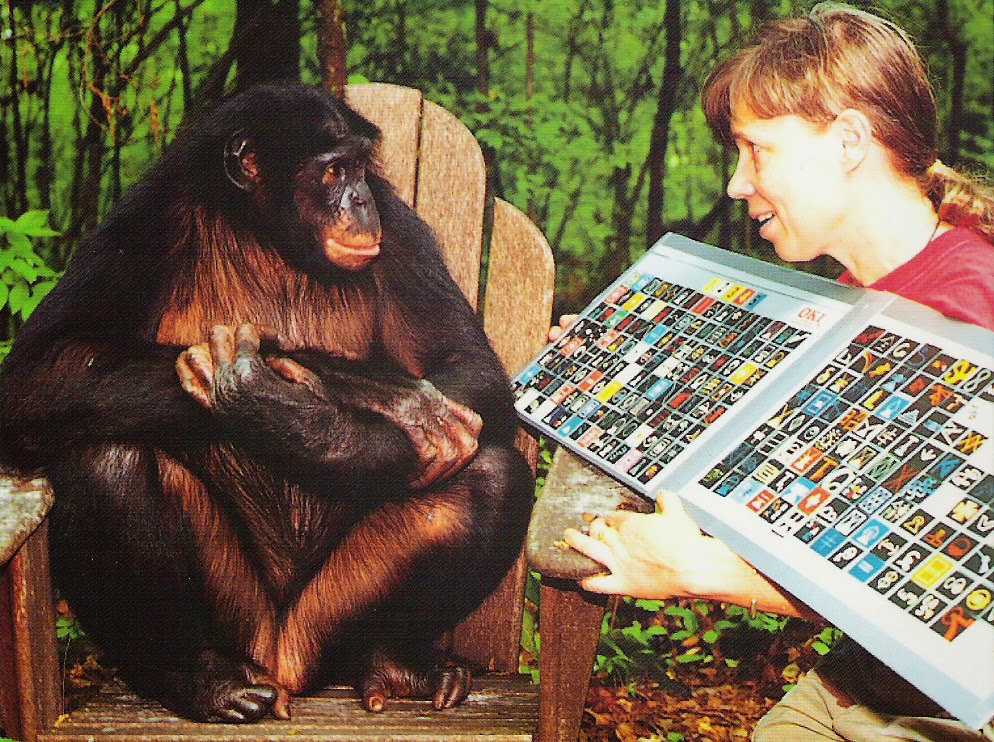 Warp and Woof at the Hole NYC

May 7 – June 20, 2014
The Hole presents Warp & Woof, curated by Toby Clarke (owner of Vigo gallery) and Kathy Grayson. Taking it’s title from the weaving terms “warp” (the vertical and static component of the weave) and “woof” (the dynamic and horizontal aspect of the weave), this exhibition looks at textile-driven abstraction across continents in emerging art. 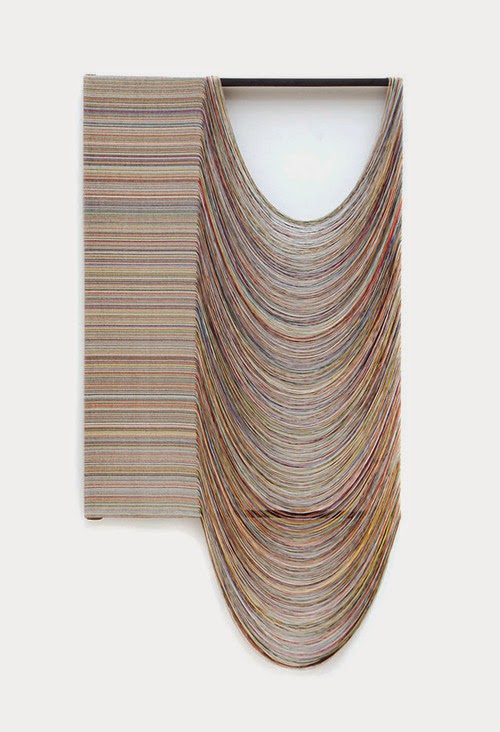 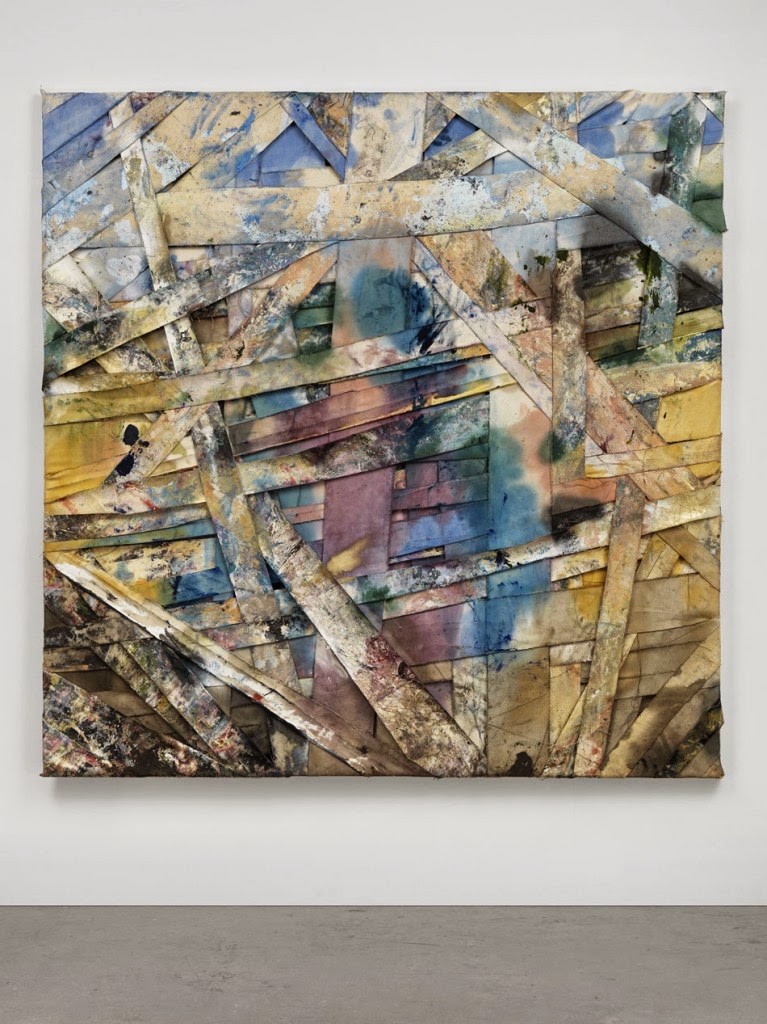 It's a shame as I only saw this exhibition at Lisson the day before it closed but I thoroughly enjoyed these new paintings by Peter Joseph. For a number of reasons they were startling and certainly more arresting than the trite show in their other space. As acknowledged in the gallery's text it has taken Peter Joseph 30 years to finally break away from the restraint of formal, geometric, hard-edged, paintings. The fragility of these new structures, the wash application and the palette make them tender but the Spartan simplicity is bold and the combination sings. It is notable that Peter Joseph is "one of only a handful of artists to show in the first year of the Lisson Gallery in 1967 (alongside Derek Jarman and Dom Sylvester Houédard among others), Peter Joseph is the gallery’s longest serving artist. This will be his fifteenth exhibition at Lisson Gallery." 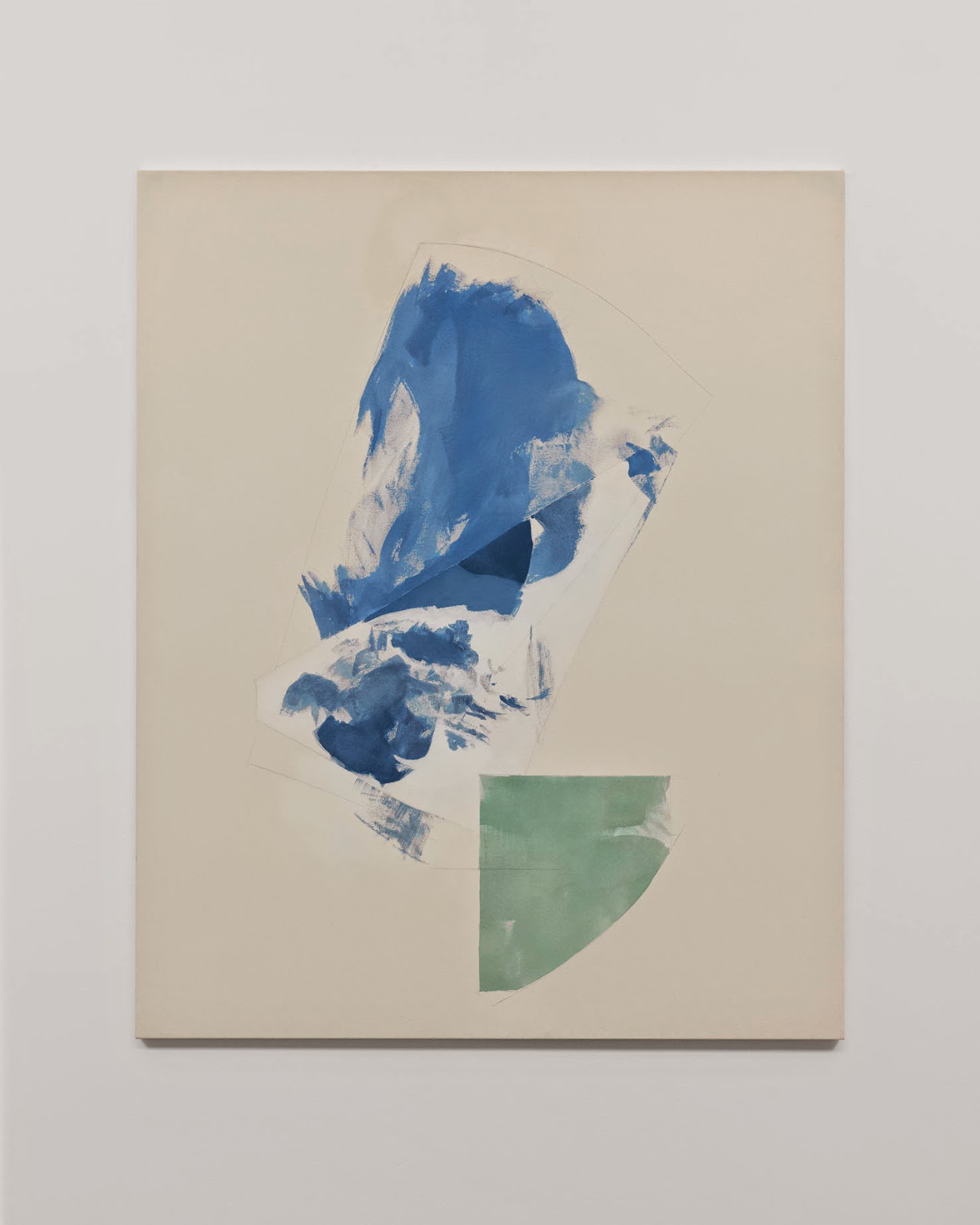 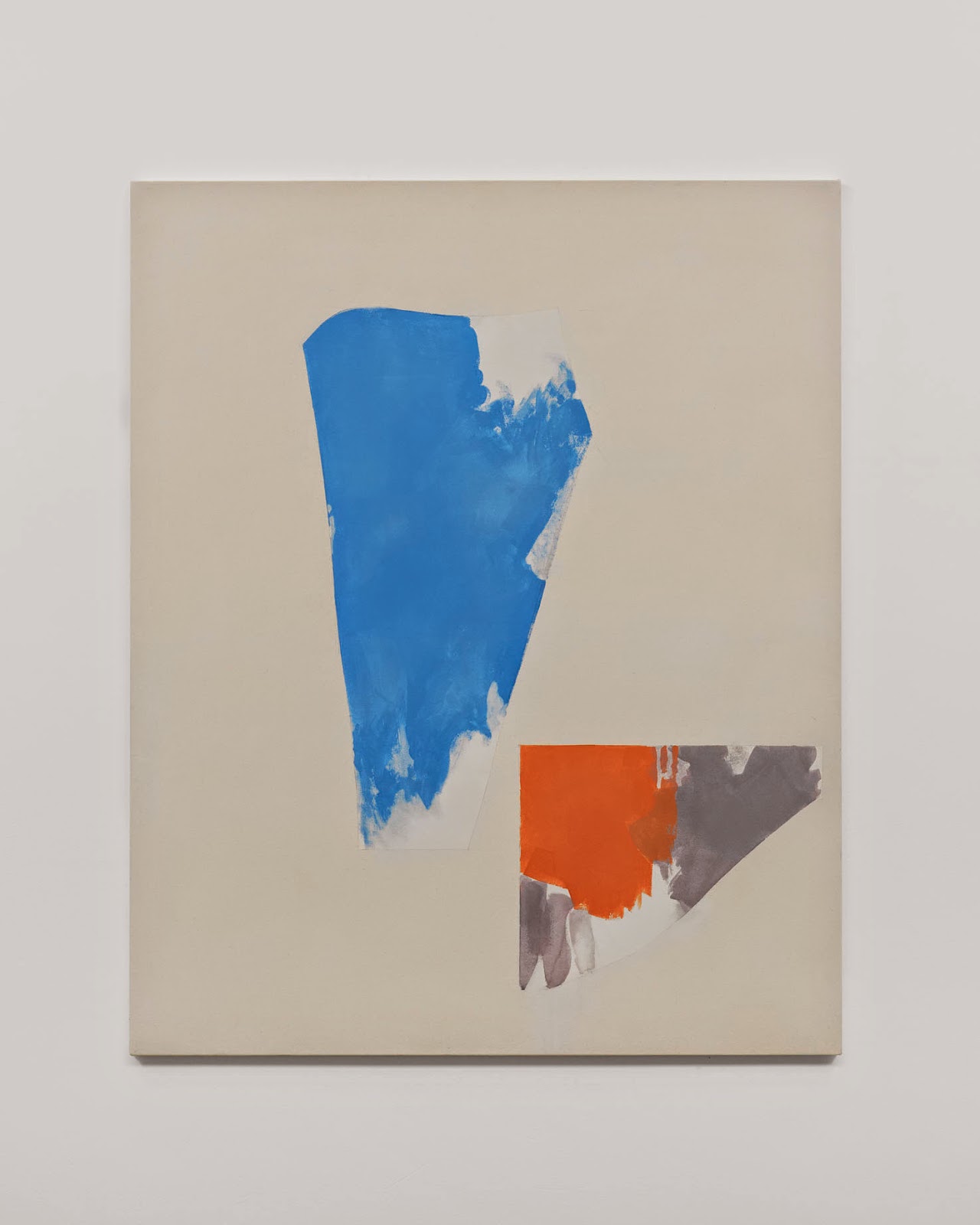 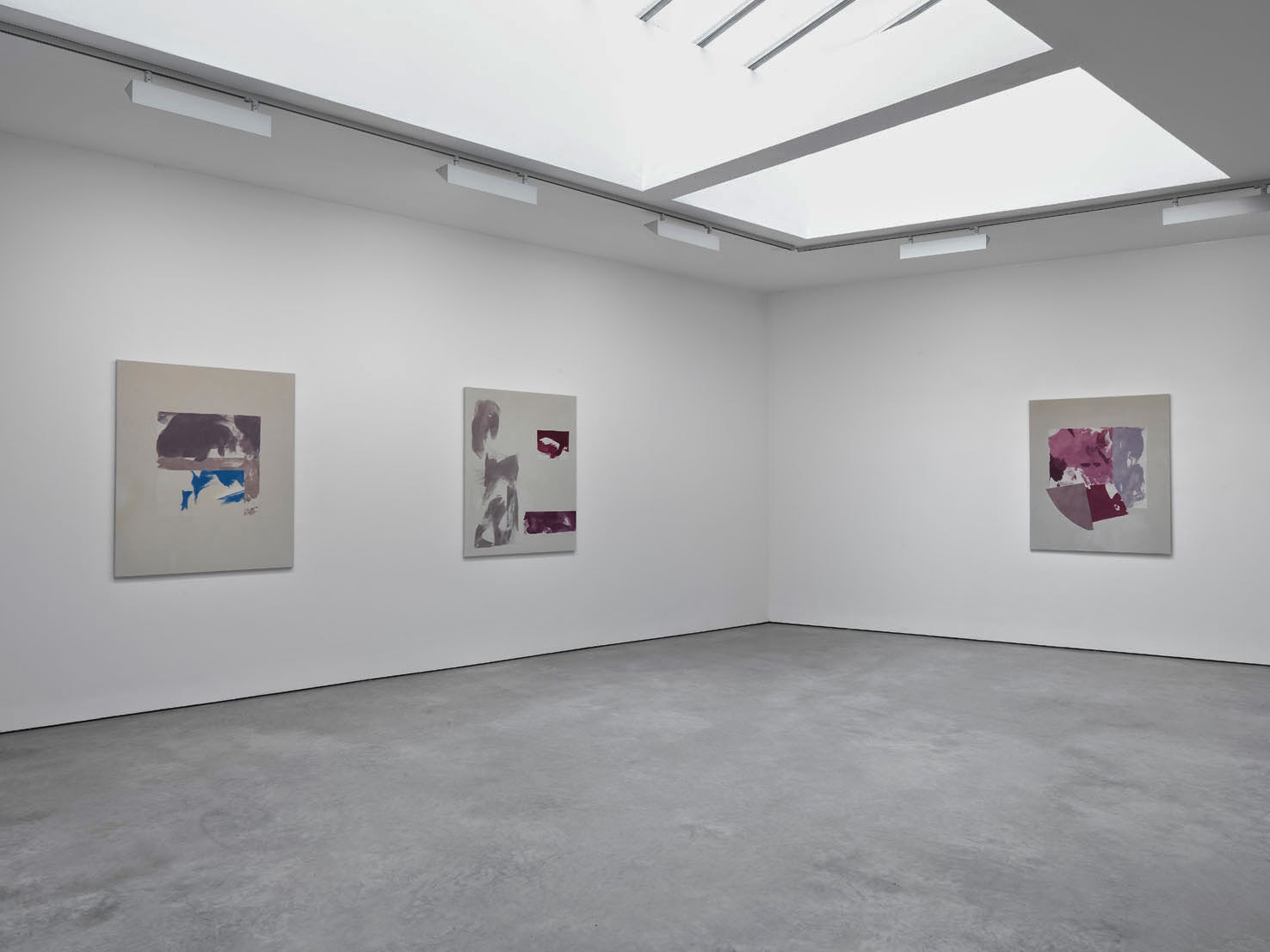 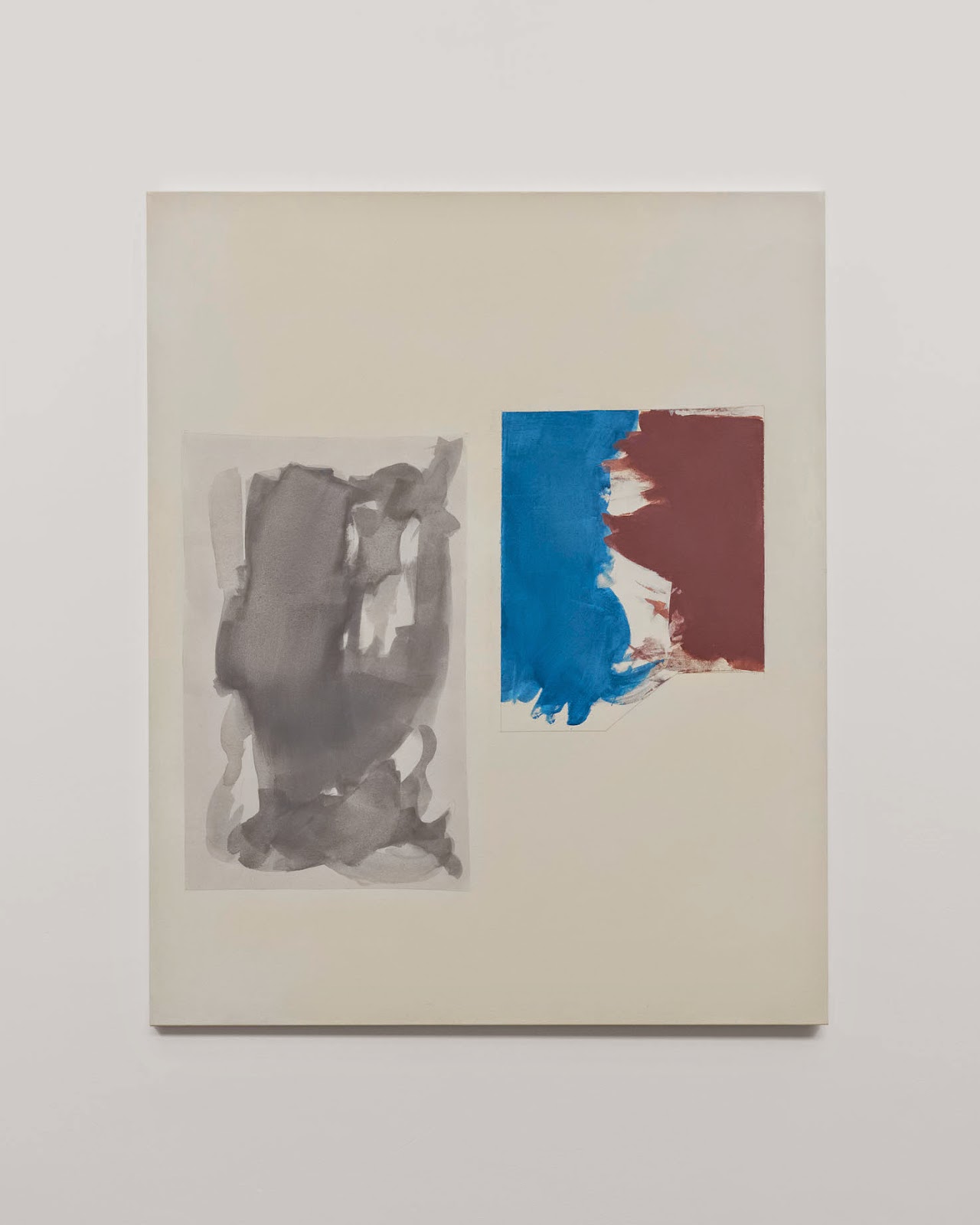 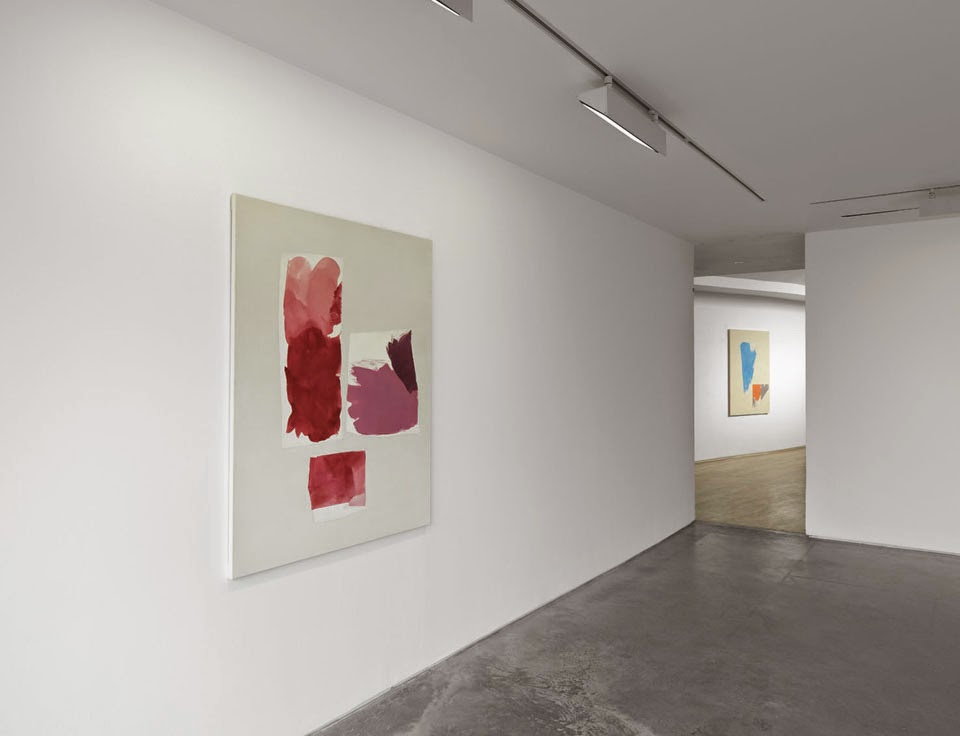