Contextual criticism or clash of styles - Julian Schnabel at the Dairy

Alastair Sooke of The Telegraph doesn't like Julian Schnabel's show at the Dairy Art Centre and apparently his opinion that these are "awful" paintings is "irrefutable".  Take note artists that might be looking for Mr. Sooke's approval, glossy surfaces shouldn't be used on a painting because it might reflect the lights of the gallery and even trigger in you thoughts of a toad's back. And never frame your work with a grand frame lest you might be judged as having an ego. This last criterion might be a concern for artists exhibiting in a grand setting such as the Turbine Hall or on the plinth in Trafalgar Square. I haven't seen the exhibition or met Mr. Schnabel so Mr. Sooke may be right but sadly, at a distance, his criticism in its frame of the Telegraph seems to be as pompous and as lacking in thought as he claims Julian Schnabel to be. For what its worth I saw this painting in Vienna and I haven't forgotten it. 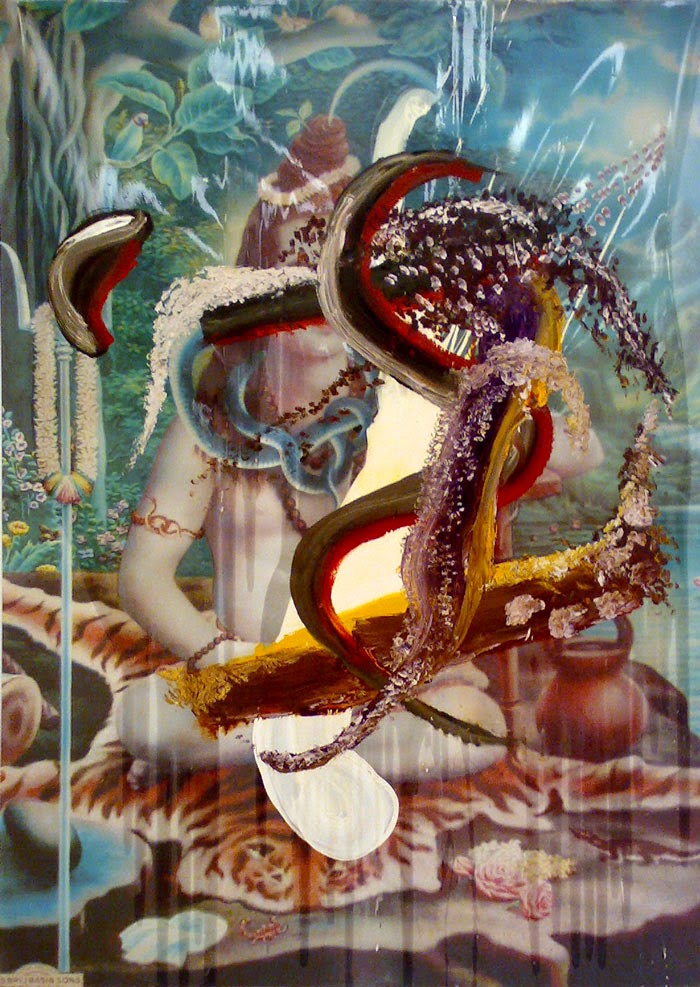 An unreleased documentary captures the magic of the modern master at work. The extraordinary finished painting, previously unknown, will be offered at Sotheby’s this May. Jennifer Krasinski looks at the revealing footage.
Thomas Bouchard’s film Around and About Joan Miró (1955) is undoubtedly a delightful documentary portrait of the Spanish artist and his milieu. But what makes it exceptional is that it features an eight-minute sequence in which Miró creates a painting that was, until recently, unknown to the world. Filmed in New York on 12 October 1947, as evidenced by the signature and dedication on the back of the untitled canvas, this footage gives contemporary viewers a rare, intimate look at the artist’s process, one that brings the painter to life as he in turn gives life to a work of art.
Watch fascinating trailer here.
﻿

Miró and Bouchard probably met in 1947 during the artist’s nine-month stay in the city to work on a mural commissioned for the Cincinnati Hilton Hotel. Bouchard had long been a photographer of dancers and choreographers such as Martha Graham, Hanya Holm and Charles Weidman, a fact that is hardly surprising given the film’s focus on the details and dynamics of form and movement. With great sensitivity and attention, Bouchard captured the rhythms of the artist as he painted a pair of colourful, fantastic biomorphs with a graceful, free hand. A series of close ups on Miró’s paint-loaded brush are edited as though to choreograph the steady turns and gestures that summoned and materialised his bold vision. At once entrancing and illuminating, Bouchard’s footage reveals the particular vitality of Miró’s practice, allowing audiences to see with greater clarity the life forces that still simmer beneath the surface of his paintings.

Jennifer Krasinski has written about film, video and performance art for Artforum.com, Art in America and others. She is a recipient of a 2013 Creative Capital | Warhol Foundation Art Writers Grant.
Works by Joan Miró from the Bouchard Family Collection will be offered at the Impressionist & Modern Art Evening Sale at Sotheby’s New York on 7 May.
Copyright courtesy of Sotheby's New York.
Posted by David at Friday, April 25, 2014 No comments:

Ahmet Oran's exhibition of paintings at Rampa in Istanbul runs until May 24th. 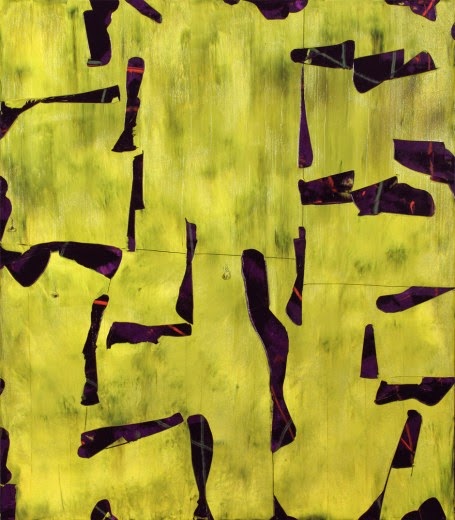 Born in Çanakkale in 1957, Ahmet Oran studied painting in İstanbul and Vienna. From 1977 to 1980, he studied at the Academy of Fine Arts in İstanbul with Professor Adnan Çoker. Between 1980 and 1986 he studied painting, glass painting and graphic arts under Prof. Carl Unger at the Vienna Academy of Applied Arts. Afterwards, Oran continued his studies with Prof. Adolf Frohner from 1986 to 1987. For over twenty years, Ahmet Oran opened numerous solo exhibitions and participated in group exhibitions both in Turkey and abroad. His works have been exhibited in contemporary art museums including İstanbul Modern, Kunsthalle Bonn and Lentos Kunstmuseum. 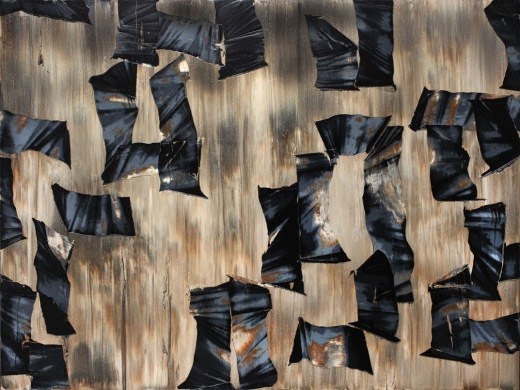 Oran creates colorful strips on the surface by peeling the shell of the canvas painted layer upon layer using palette knives, scrapers and pieces of wood of various sizes. 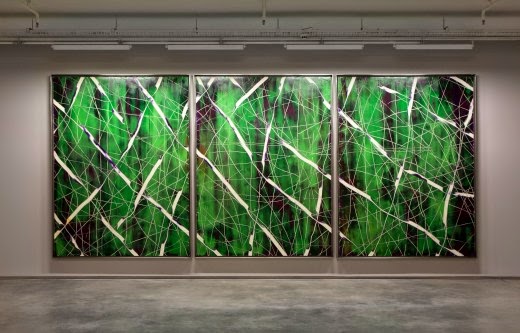 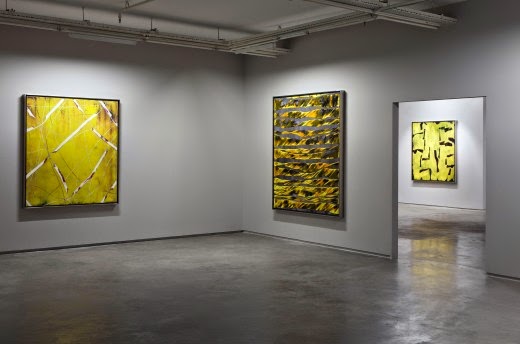 'Blast 2014' Conference, questioning the influence of the Vorticism movement, at Bath Spa University in July.

The discussion will be about "the ins and outs of showing painting - whether abstract, figurative, installation etc" 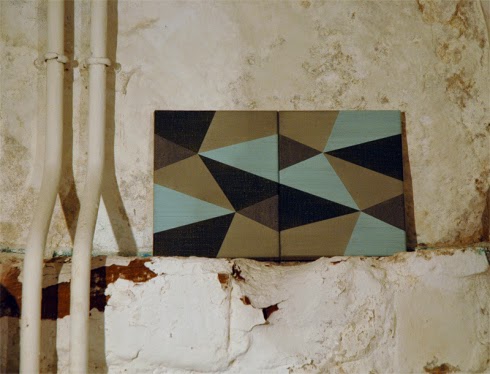 More details below.  Should be a really interesting discussion.  You can book here on eventbrite (it's free):

﻿The soon to be open Soulages Museum at Rodez in the Pyrenees, is preparing for a major retrospective of the eminent French post war master of abstraction. This is a great place to explore the master of abstraction at his hometown. Soulages is very unrepresented in Britain, it's about time the Tate a retrospective on him, to me he has a much more sensitive touch than any of the American abstract painters that have had major retrospectives and at 95 he's still significant.
The following is an extract from The Telegraph newspaper on the retrospective he had at Centre Pompidou in 2009:
"It is touching to see 63 years of my work brought together," said Soulages, a big slow-moving man dressed, appropriately and as per usual, in black at a pre-launch tour of the canvases. "But I don't much like the word 'retrospective'," he added. "I am still painting, I have works drying in the studio."
Soulages, who works in southern France in a studio looking out over the sparkling Mediterranean, is famously known for switching direction halfway through his career to emphasise how light is reflected from the colour black - a concept he calls "ultra black", or outrenoir.  Using thick layers of black paint, he scrapes and digs and etches using bits of rubber, spoons or tiny rakes to create smooth and rough textures that absorb or reject light, subtly changing monotonous black.
"I was always interested in black, even as a child," he said. "I used black paint and when someone asked what I was painting I said 'snow'. I think with hindsight that I used black to make the paper look more white."
"At home I have an outrenoir canvas facing the sea that changes colour according to the weather," he added. "I have even seen it turn blue."
"Ultra-black is like another country," Soulages said.  Black had been an obsession with artists since the dawn of humanity, he said. "Why did people in prehistoric times draw in black inside dark black caves when they could've used chalk?"
Works by Soulages, who in 2001 became the first living painter to be given an exhibition by the Hermitage in St Petersburg, never have titles, instead being named by size and date of production. Born in southern France, he began painting in his teens, showing his first works after the war in 1947 when friends such as Hans Hartung and Francis Picabia were dabbling in reds and blues and yellows. Soulages instead opted for the walnut stain used on furniture to create geometric works on paper or canvas, and even tried daubings of dark tar on glass for a time.  At 33 his work was shown at the Venice Biennale and he held his first solo New York exhibition just two years later.
Through the years black featured heavily in his works but it was not until 1979 that he switched course to the huge outrenoir canvases of the last three decades.  "My work has changed," he said. "What you see here we chose from 2,000 works."
"I think I make paintings so that those who look at them, myself like everybody else, can find themselves in front of them, alone with themselves," he once said.
Posted by David at Wednesday, April 09, 2014 No comments:

Lisbon artist Jorge Queiroz presents his recent paintings at VenenKlasen/Werner in Berlin.
14th March - 26th April. Jorge Queiroz  was resident in Berlin for a number of years and has recently moved back home where he will also be showing later this year. 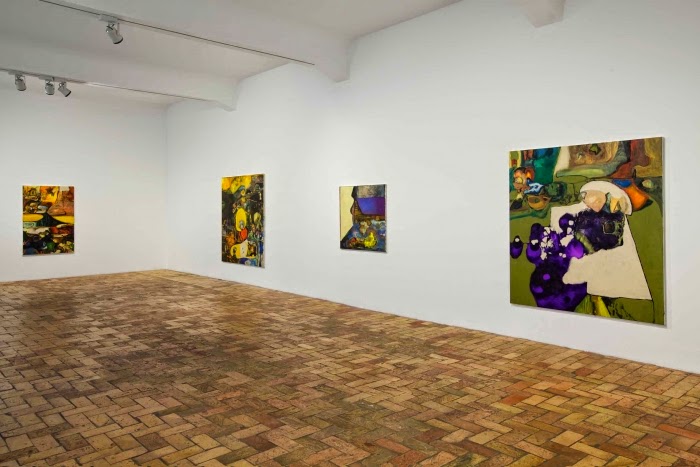 The exhibition at VeneKlasen/Werner presents a group of new paintings in which Queiroz continues to pursue an intense exploration of his subconscious mind and its potential to generate powerful imagery. The results are unsettling visual meditations that fluidly synthesize landscape, figure and abstraction to evoke the feeling of dreams or faded memories. Narratives ebb and flow, stopping short of any clear story or logic." 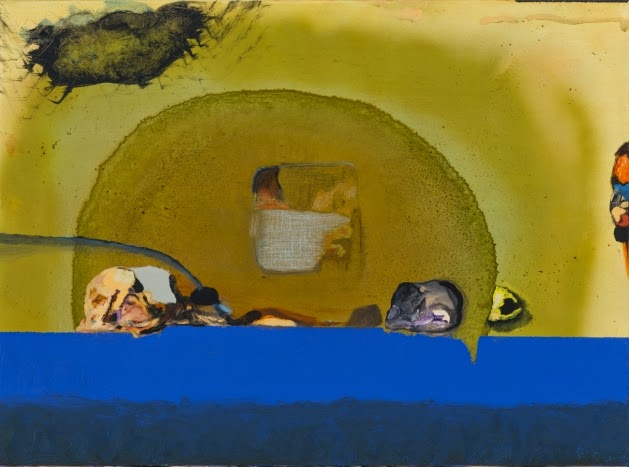 JORGE QUEIROZ
THE MUMMY AND THE ASTRONAUT, 2013 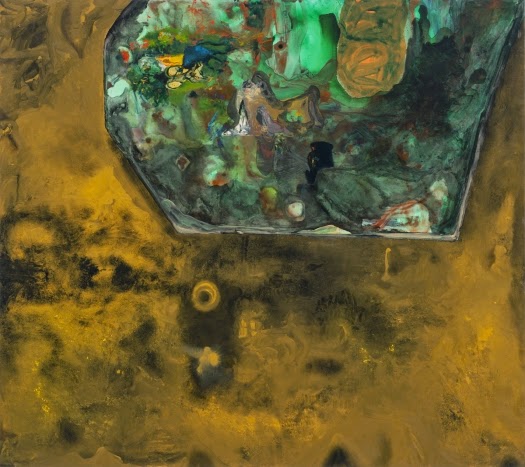 JORGE QUEIROZ
ISLAND OF THE PLACE OF, 2013

Alan Davie Scottish Jazzer has died the day before the exhibition of his work opens at Tate which runs until 28th September. 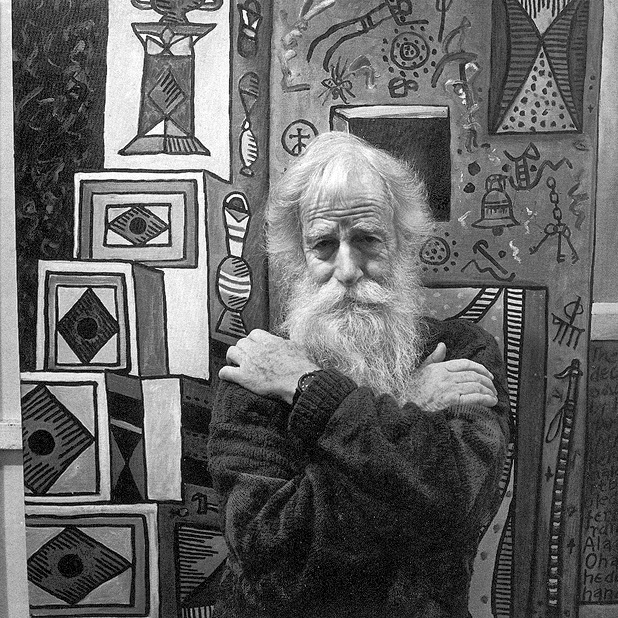 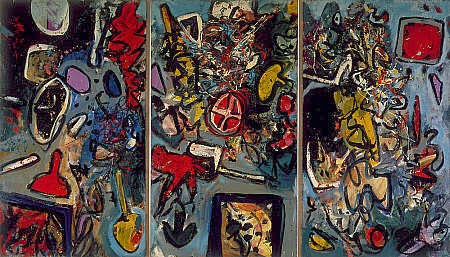 José Heerkens was the artist in residence at The Josef Albers and Anni Albers Foundation and is soon to publish 'Upon the Long River', her book of watercolours which she produced during that time.

'Written Colours' oil on linen 2013
José is showing her work in Concret Nu at Spazzio Offices, Buitenom 243 - 268, Zoetermeer Stadscentrum in an exhibition curated by Hannie van der Made.Here is a video produced by Sonja Sonnaveld in 2012 of José in her studio.
Posted by Monk at Thursday, April 03, 2014 No comments:

Death of a Musketeer

Dubbed as one of “the three musketeers” of Chinese artists learning Western art in France in the 1950s, 94-year-old Zhu Dequn passed away in Paris on Wednesday. Together with the other two “musketeers,” Wu Guanzhong (1919-2010) and Zhao Wuji (or Zao Wou-ki, 1921-2013), Zhu was one of the most revered Chinese artists of today and widely acclaimed for his pioneering style of integrating traditional Chinese painting into Western abstractionism. 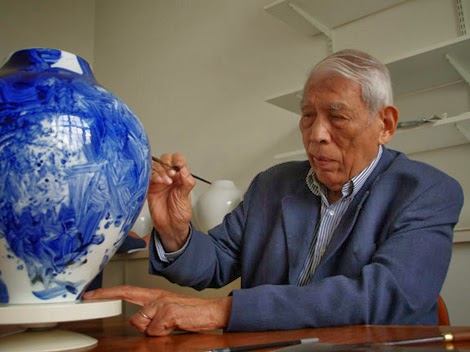 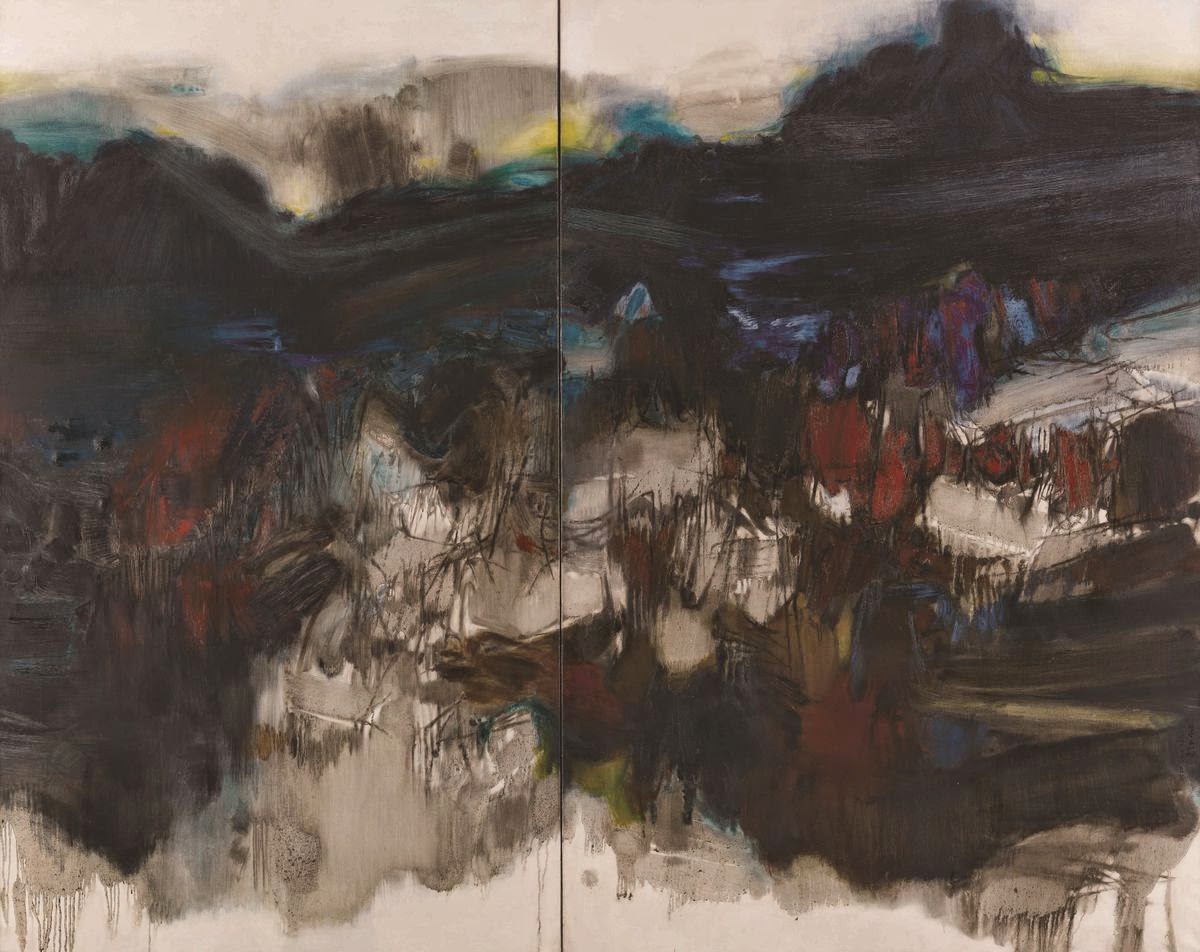 Zhu Dequn, Also called Chu Teh-chun. Born to a doctor's family in Xiaoxian, Jiangsu Province. In 1935 he studied Western Painting at the Hangzhou National Art College. Between 1944 and 1949, he taught at the Nanjing Central University, after which he taught in the Art Department of Taiwan Normal University. In 1955 he settled in Paris, where he has held numerous solo exhibitions and enjoys a reputation as one of the most well known Chinese artists. He has also held a solo exhibition at the China Gallery of Fine Arts, Beijing, 1997. Based on the traditional Chinese concepts that fuse poetry, calligraphy and art, Zhu's style integrates Eastern and Western painting traditions.
ZINZARTMUSEUM.com.cn
Posted by Monk at Tuesday, April 01, 2014 2 comments:

"I don't think you necessarily have to be outstandingly good at something to want to do it," she says, "and the store put on achieving excellence very young is quite unpleasant, as though people become destined from an early age to either achieve, or not achieve. " 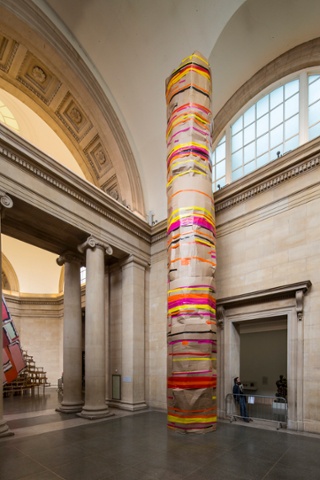 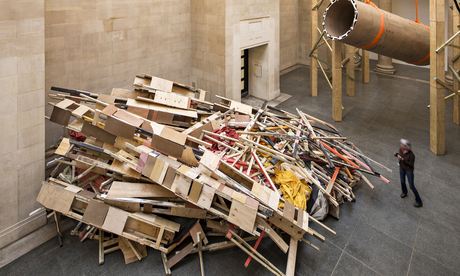