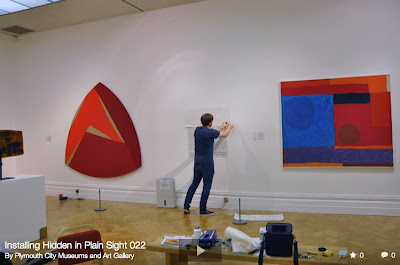 An insight into the exhibition from curator and artist Adam Milford:

What motivated you to create the exhibition?
The main motivation behind this exhibition was to curate a show from the collection that could be researched and delivered relatively quickly, and on a very limited budget. The exhibition is running in parallel with Artists Make Faces, a large scale, externally curated show (by Monika Kinley), that is on a different level in terms of budget and loans. The expectation was that I would work on both exhibitions simultaneously, acting as curator for Hidden in Plain Sight, and Learning Officer (my usual position) for Artists Make Faces.

Post-war painting is a particularly strong area of our fine art collection, especially from artists based in the South West, so my goal was to bring works out that hadn’t been on display from a long time for our visitors to experience. Some of the works have been out in the last five years, while others haven’t been in over 20 years, and there is a possibility of that one hasn’t been out since it was purchased in 1967, though unfortunately our records can neither prove nor disprove that claim.

Another goal was to select work solely from our collection, though I broke my own rule by loaning a Barbara Hepworth sculpture from the Hepworth Estate, by including a live recording of Keith Rowe’s extraordinary guitar abstractions, and an unseen film of Patrick Heron at work in his studio from 1959.

The work was often purchased directly from artists. For example, Justin Knowles’ painting Three Reds with White was purchased direct from the artist, along with Patrick Heron’s Rectilinear Reds and Blues, also from Knowles’ collection. Other works were bought from the important art societies of the region – Plymouth Society of Artists, St Ives Society of Artists, Newlyn Society of Artists, and probably the most well-known, the Penwith Society of Arts. Work by lecturers and students from Plymouth College of Art were also collected. Cumming was an early advocate for the educational importance of children being exposed to art at an early age, encouraging visits to the galleries, and he also organised exhibitions of children’s work

Which is the most recent work to be bought?
Sadly, the ability for us to purchase works for the collection has become more difficult. When Cumming collected these works we were lucky enough to have been given a grant, I believe from the Gulbenkian Foundation, which allowed their purchase. The most recent work to come into our collection that is included in the exhibition is Julian Lethbridge’s Untitled, 1991-1992, which was given to us in 1996 through the Contemporary Art Society. CAS have also recently allowed us the opportunity to purchase a work by Turner Prize 2013 nominee Lynette Yiadom-Boakye, which is currently at the Venice Biennale. We’ve also had a very generous donation from Cornwall-based painter David Whittaker of a work currently on display in Artists Make Faces. We can’t compete with current market prices unfortunately.

What difficulties did you have?
Some of the works I would have like to have shown have not stood the test of time. I’d fully intended to show a sculptural piece by Harry White, an artist working in Liverpool in the late 60s, but after bringing it out from storage it was obvious that it had corroded and deteriorated in areas of the work that couldn’t be conserved in the short time we had. Other than small things, the process was remarkably smooth.

How does the work stand up against current practice and are there any connections that have become evident?
Well, it seems sensible to start by saying that a number of the artists included are still working today. Painting seems to be in the ascendency once again, and the inevitability of questions of influence or precedent arise when discussing this work. I wouldn’t want to suggest that artists at work today are particularly influenced by the work of the artists included in this exhibition, however the legacy of their practice is echoed somehow in the work of artists today. Take an artist like Justin Knowles, from his decision to become an artist in 1965, to his solo shows in Milan, New York, London, and here in Plymouth in 1967. His work progresses from hard-edge, shaped painted canvases to systems-based wall pieces and three dimensional work, echoes of which I believe can be seen in the work of artists such as Andrew Bick. I’m sure there are other echoes – again maybe filtered through others – in the work of artists such as Katrina Blannin, Onya MacCausland, or Richard Nott. 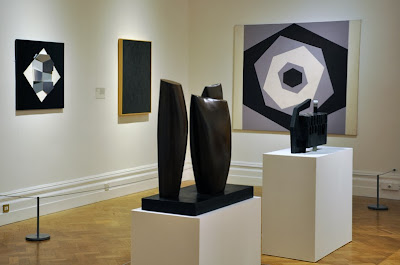 The work I selected for the exhibition, certainly the paintings, all share a sense of the picture plane being flattened or modulated to offer a more shallow depth of field. This is something I’m dealing with in my own painting practice, no doubt influenced in part by my critical thinking around this show. I didn’t want to just curate an exhibition that looked at St Ives modernism, though a number of the artists included are first or second generation St Ives artists. It was perhaps an attempt to reframe them in a broader context, post-Situation. This is why I allowed myself to include much later work by Ian Davenport and Julian Lethbridge, whose works both share a sense of a flattened or shallow surface.

What are you expecting the audience response to be?
I expect that most people will be challenged by the work, to be honest. Most of the work is over 40 years old, and yet many people still feel they cannot relate to or ‘understand’ the work. One thing I hear is that people don’t ‘get it’, or it’s not ‘their cup of tea’, but through talking about the work with them that fear subsides. I deliberately chose the title Hidden in Plain Sight to reflect a kind of paranoia – that they’re ‘out to get you’ – when in reality they’re no more challenging than a Renaissance allegorical painting or Victorian narrative painting might be. We might not instantly recognise the content or context, but there is nothing wrong with that. I’ve already given a half-hour talk about the progression of artists work in the region from ‘St Ives’ to hard-edge, and will be giving another to talk about painting as ‘object’. These, plus the interpretation in the gallery should soften the blow in many ways, without detracting from the intention of the artist. 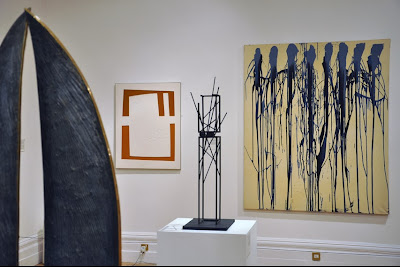