This will be an intriguing exhibition of ten selected works between 1983-85 is at Gagosian Gallery, New York. De Kooning often discussed the idea of being a 'slipping glimpser', capturing that moment between the idea and the moment of action, of contact with pigment on canvas, which when De Kooning developed Alzheimer's, became a reality. Curated by the eminent John Elderfield, whose book on Matisse, is still a great book, all these years later. The show is on until 21st December, looks great..
This is what Gagosian say: 'Gagosian Gallery is pleased to announce an exhibition of ten paintings by Willem de Kooning, created between 1983 and 1985. The exhibition highlights the critical three-year period in the last decade of de Kooning’s long career, during which he radically transformed his style. Organized in close collaboration with The Willem de Kooning Foundation, it is curated by John Elderfield, Chief Curator Emeritus of Painting and Sculpture at The Museum of Modern Art, New York, and a consultant at Gagosian Gallery.' 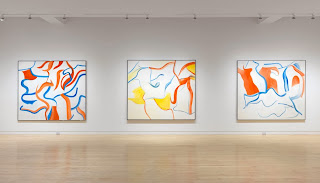 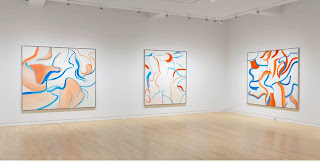 John Elderfield has observed: “These were very highly regarded when they were first exhibited in the 1980s, and they resonate even more today. De Kooning truly reinvented himself in these extraordinary canvases. He had the confidence to give up the lush painterliness and visibly reworked appearance of his earlier works in favour of something more reductive; but they remain not only spatially complex, but also extremely physical pictures, both visually open and densely embodied.”
Posted by David at Wednesday, November 20, 2013