From the 30th march - 25 June at Laboral in Northern Spain 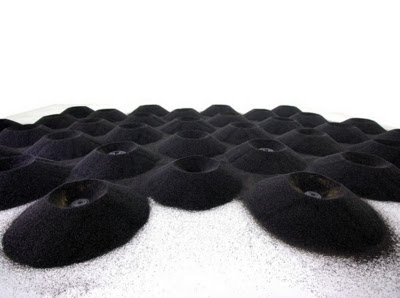 "In 2007, LABoral held the first LEV (Visual Electronics Lab) Festival, whose initials pay tribute to Lev Thermen, the Russian scientist who was the father of the present-day synthesiser. The founding goal of the festival was to provide an eclectic and qualitative overview of electronic sound creation and its intersections with the visual arts. Throughout its five events, the festival has featured a selection of the most interesting projects by international creators working in this field, spanning from up-and-coming promises to renowned artists."

"The idea behind this international group exhibition is to examine the synthesis between image and sound, the various graphic and physical representations of sound, and its evolution in contemporary art."

"Sound should not be detached from the surrounding that informs it: space, vibration, wave, technique for representation, perception and even visualization. "

Is this last quote a rule or an observation that Fiumfoto, the curator feels should apply to all artists or an indictment of sampling in general?  Something might have been lost in translation but it is a shame about the text as the festival and the work looks appealing.