Victor Pasmore: From Constructions to Spraypaint. An often neglected British abstract artist of the the post-war years, Pasmore played a significant role in modernising British art education and was an influential teacher at Newcastle School of Art, with Richard Hamilton and Ian Stephenson. His late works are becoming more known and understood for their innovative use of spraypaint and the poetic use of line. This exhibition champions his last great abstract works that reflect his early interest in landscape and a very British sense of colour, also showing his three dimensional constructions. This exhibition is on until 12th January, also Roche Court Sculpture Park/New Art Centre is a unique and funky place to visit with much to offer the art lover on a cold Winter's day.. 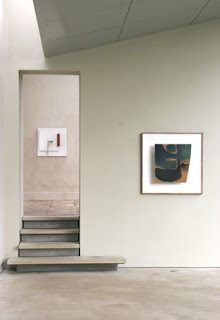 From Press Release: 'Victor Pasmore: From Constructions to Spray Paint, brings together key pieces from the most important decades of Pasmore's career. His constructed reliefs from the 1960s are amongst his most familiar geometric works in which Pasmore combined ideas of growth and harmony in three dimensions. These will be shown with essentially two-dimensional works combining fine lines and broader bands of colour. In later years, Pasmore returned to a more poetic style of painting, in which colour and organic forms dominated and his subsequent use of spray paint gave an immediate rhythm and movement, which replaced the rigour of his more static compositions.'
Posted by David at Friday, December 23, 2011