Found this interesting exhibition of abstract painting, this is the work of Markus Amm at David Kordansky Gallery. it is very subtle, have a look..

There seems like there is little going on here...I've been to Culver City, I don't remember there being much there, well now they have Markus Amm and the Kordansky Gallery! The show includes small, medium and large-scale works that fall into two broad categories: acrylic-and-gesso paintings on canvas, and oil paintings on gesso board.
'Amm utilizes the constituent elements of painting as the foundations for works that reassess the legacy of geometric abstraction. He assigns content-based value to what might be mistaken as purely formal practice, and shows how even the most basic, platonic shapes can be mined for connections to a complex contemporary world. In some cases, this means revisiting preconceived ideas about the relationship between image, material and support; in others, he shows how the conceptual envelopes in which painting is seen readily influence its composition.
These monochromatic fields are divided by sharp lines; their brief moments of color separate the compositions into interlocking forms, provoking readings in which shapes fit into, surround, complete, or sit on top of each other. The lyrical quality of the work belies the fact that Amm applies the lines by using tape and acrylic spray paint. Relative speeds of painting and looking are played against one another, and the eye slows down in places where it is accustomed to speeding up.'

There is a subtle touch with these works, they are more than just minimalist explorations but interesting evocations in paint, do they explore emotion? who knows, does it matter, just great painting...
Posted by David at Wednesday, September 28, 2011 3 comments:

The team at CERN have apparently revealed that light travels slower than nutrinos and in doing so they appear to have completely challenged the description of nature that has been in place all my life. Einstein when he arrived at his theory of relativity declared that his work did not undermine the work of Newton's. It took 200 years for the mechanical theories to be superseded by special relativity. General relativity was published in 1916 and was based on the speed of light. Now 96 years later it has been suggested that this model doesn't stand up - is not true. So you can imagine how excited I was that science's certainty was possibly flawed. ( Regular followers will understand why this appeals despite being a fan) but here is a fascinating description by Ethan Siegel theoretical astrophysicist, of what the CERN experimenters are up to and a set of reasons why light may still be the fastest thing in the universe! No comparison to art at all.
Posted by Monk at Monday, September 26, 2011 3 comments:

Robert Motherwell at Bernard Jacobson, first 'Works on Paper' in the UK

The significance of Robert Motherwell is well-known, he is very popular at Abstraktion for the diversity of his ideas in drawing, painting, collage. It is hard to believe that this is the first exhibition of his works on paper in the United Kingdom and well done Bernard Jacobson Gallery, 6 Cork Street, London. This show is open from 11 October to 26 November 2011.

Robert Motherwell was a major figure in the and development of Abstract Expressionism and the youngest member of the ‘New York School’, a term he coined. I explored his use of Zen Buddhist ideas and iconography for my thesis and realsied how broad and deep his influence was on his time and since. Yet he remains the lesser known of the Abstract Expressionist movement.

'His career spanned five decades during which time he created some of the most iconic images of the 20th century. A passionate advocate and articulate spokesman for Abstract Expressionism, he believed that ideas and emotions were best communicated through the bold forms and gestural lines of abstract art. This exhibition will include sixty works from the 'Lyric Suite', a group of works from the 'Beside the Sea' series and a selection of works based upon James Joyce’s 'Ulysses' as well as an abstract portrait of the poet. A further selection of works from the 1940s to the 1980s includes 'Elegy' and 'Je t’aime' as well as automatism drawings, work from the 'Drunk with Turpentine', 'Gesture' and the 'Open' series.

I had the pleasure of interviewing Sean Scully in Germany earlier this year. You can read the interview in Turps Banana-Issue 10, UK painting magazine.. David Moxon and I attended the launch last night in Hoxton, London. With our wonderful hosts Marcus Harvey and Peter Ashton-Jones and with bar snacks at hand, we had a great evening. Abstraktion met the art historian Nicholas Usherwood from Abstract Critical and discussed, guess what, abstraction. Also present and engaging were David Ben White, Christopher P Wood, Garth Lewis, Gus Harvey, Jeffrey Dennis, Jasper Joffe, Clive Hodgson, Tim Renshaw amongst many others we didn't have the time to speak to... 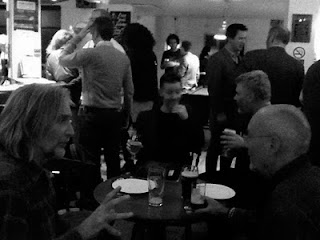 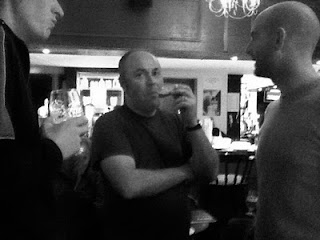 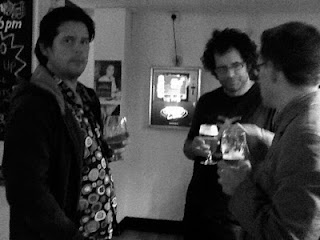 Remembering Richard Hamilton and 'An Exhibit', 1957

The British artist Richard Hamilton  has died aged 89. Hamilton made his name in 1956 with the Independent Group exhibition at the Whitechapel Gallery entitled 'This is Tomorrow' (re-exhibited earlier this year) with his now infamous collage 'Just what is it that makes today's homes so different, so appealing?' and ushering in Pop Art. He also designed the 'white album' for The Beatles, documented the Rolling Stones drug bust with Robert Fraser and Mick Jagger in the the back of the police car in 'Swingeing London' and worked closely with Duchamp. But I want to explore his contribution  to abstraction in collaboration with Victor Pasmore entitled 'An Exhibit' from 1957.


This has been re-made a number of times and filmed, especially at Generali Foundation in Austria. 'The premise of 'An Exhibit' was to show 'no objects, no ideas': a show that consisted of colourful panels loosely suspended in space so that visitors could amble freely between them. This formal decision to do without exhibits and make the display itself the subject of the show can be traced back to a series of attempts in modern art to expand painting into space, as in the case of El Lissitzky or Mondrian, or to elevate the display to the status of a subject in itself, as in the case of Frederick Kiesler or Herbert Bayer. 'An Exhibit' is relevant also as a form of interrogation of the institutional space and the roles played by authorship and the position of the beholder: composed of modular elements, the space enables forever different subjective experiences of spatiality as the visitors become authors who "conceive" the space in forever new ways. The translucent panels, finally, mark a play with the experience of transparency and opacity that is of decisive importance to the subject’s perceptions in a world defined by media.'

Posted by David at Thursday, September 15, 2011 No comments:

'There are at least three components to a work of art. Often one of them, Subject, supercedes the others, bordering on distraction and flirtation with nostalgia. Abstraction diminishes or sublimates the role of 'Subject' in such a way as to allow Form a chance to take center stage. In essence, Form becomes the Subject. Ironically, this rebalancing gives way to a clearer, and perhaps more truthful, experience of a work of art as a real thing - something that is itself rather than a reference to some external 'other.'

Manifest, launches its eighth season with a project intended to feature and explore contemporary abstraction. From non-objective, geometric, expressive, etc., to figurative abstraction (works in which there is a recognizable subject matter that is distorted, is in some way not 'realistic', or is clearly secondary to the overall formal nature of the work).

For this exhibit 374 artists submitted 977 works for consideration. Twenty-two works by the following 19 artists were selected by our two-part jury/curatorial process for presentation in the gallery and catalog.'
Posted by David at Tuesday, September 13, 2011 2 comments: