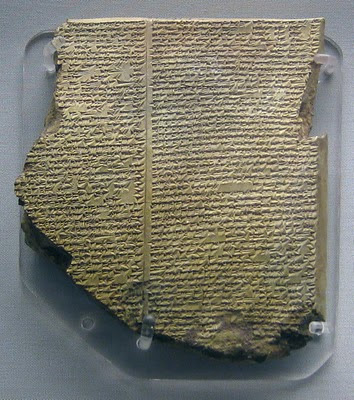 The Flood Tablet part of the Gilgamesh Epic
courtesy of Wikicommons
I was captivated when I visited the British Museum recently by the cuneifirm tablets. These beautiful man- made abstract works are incredibly sophisticated means of communicating, describing and defining. The structure appears almost unreadable. On some tablets the marks are so small and fluid the definition of forms looks almost inseparable from one and other. It is stunning that these digital like abstractions carried complex stories and detailed instructions. There is even a dictionary of synonyms! I find it humbling to think that these were made as far back as 3000 bc, the skill to make and read them was lost and then thousands of years later these intricate works were deciphered. I was also struck by the time that was readable in the marks. I could experience the speed at which the indentations were made and sense whether they were formal or personnel.  Beautiful marvels.
Posted by Monk at Tuesday, January 11, 2011