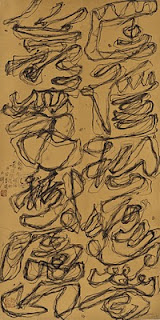 Wei Ligang was born in Datong, Shanxi Provence. A child prodigy in mathematics, Wei entered the prestigious Nankai University in Tianjin at the age of 17. While pursuing his mathematics degree Wei became engaged in calligraphy, studied under the renowned Li Henian. In 1988, He dedicated himself to his medium and in the late 90’s moved to Beijing to concentrate on and further develop his art. Wei Ligang was included in 'New Ink Painting 'show at Carlton Hobbs in London earlier this year where the work promoted was more Miro with its black trailing lines and filled in loops than the orientally influenced Motherwell!


Here is an extract from an interview with Wei Ligang by Xiaoxiao Yan for Artslant'China doesn't really have its own abstract art. Mostly people just follow fashion and don't even have their own judgment — they merely throw some folk symbols into their oil paintings.

So how do you understand the idea of abstract art in China?
Well, for example, Western people have already done Abstract Expressionism. But calligraphy offers Chinese artists a different kind of visual system that offers many possibilities for establishing our own kind of Eastern abstract art. This isn't just about symbols, it goes back to something deeper. Nowadays, the students at the Central Academy of Fine Arts start their training by copying realistic, naturalist sketches. Their starting point is the making of an image, and only later do they move to more expressive styling, and non-concrete things. Conversely, if the Chinese character is the object you are copying for practice, well, that's already something abstract, isn't it? And you work from this point of origin toward an abstract system. Moreover, In abstract art, the lines play a huge role. All Western masters go back to the line for their expression - Chagall, Picasso. Pollock goes without saying. When it comes to the use of lines, who has more authority than the Chinese calligraphic masters? Unlike traditional oil painting, the lines in calligraphy are extremely subtle. A brush dipped in liquid can make a very long line, and xuan paper's expressive capacity is also great - oil painting just cannot compare.' 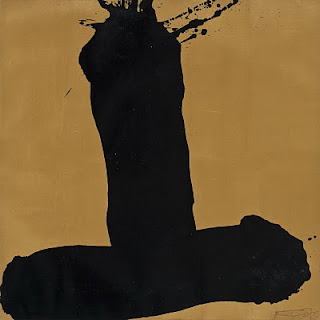 I like what Wei says about line but I think he can't have seen enough, or the best of oil paintings, if he thinks oils can't match inks for subtlety.