Tate St.Ives, Cornwall has an exhihition entitled 'Object: Gesture: Grid-St Ives and the International Avant-garde' that attempts to re-evaluate the works of a number of British artists and place artists such as William Scott, Roger Hilton, Patrick Heron, Peter Lanyon and Sandra Blow and others, in context with a wider international movements in modern art in the Post WWII years, such as CoBrA in Europe and Abstract Expressionism in the USA, with other works by Jackson Pollock, Willem de Kooning and Karel Appel. This show is on until 26th September 2010. 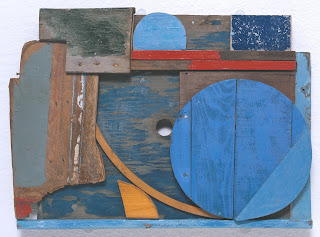 I shall be going to see this show in a few weeks and shall write a more indepth review. Until then this is from the Tate St.Ives Press Release:


'Post-Second World War art in St Ives is the starting point for this new display, exploring some of the common characteristics of Modern Art and the shared visual language of artists working in Europe and America from the 1930s to the late 1970s. Drawing on key British and international works in the Tate Collection, this will be the largest and most extensive Collection display at Tate St Ives for over ten years. Highlights include important works by British and international artists such as Mark Rothko, Carl Andre, Willem de Kooning, Barbara Hepworth, Sol LeWitt, Piet Mondrian, Pablo Picasso, Sandra Blow, Jackson Pollock and Peter Lanyon.
Considering the making and shaping of Modernism in St Ives, and marking the breakthroughs, revivals and continuities of artistic ideas which emerged throughout the twentieth century, the exhibition focuses on some of the international meeting points which feed into the story of St Ives and British Art.

Object: In the 1930s, Ben Nicholson and Barbara Hepworth were regularly visiting Paris and encountering artists such as Pablo Picasso and Constantin Brancusi. How did Nicholson find a way to craft the ‘objectness’ of his painted boards? How did Hepworth express the subconscious in her direct carvings of the 1930s? From the fragmented still-life paintings of Georges Braque in the early 1900s, to the 1980s driftwood assemblages of Margaret Mellis, Object reveals how Cubism and Surrealism influenced forms in the mid to late twentieth century.

Gesture: The materiality of paint and its connection to subconscious expression is considered in this room. Recalling significant European influences such as Tachism, Art Informel and Cobra, as well as the development of Abstract Expressionism in America with which a number of St Ives artists had a connection, it considers their influence on artists such as William Scott, Roger Hilton, Patrick Heron, Peter Lanyon and Sandra Blow. It includes works by Jackson Pollock, Willem de Kooning and Karel Appel.

Grid: Works by icons of the twentieth century such as Joseph Albers, Sol LeWitt and Donald Judd help explore the way the grid has drawn painting, sculpture and architecture together, making the viewer both psychologically and physically part of artistic experience. The selection also includes work by Ben Nicholson, Victor Pasmore, Bob Law, Mary Martin and Eva Hesse.
An illustrated broadsheet accompanies this exhibition. Published by Tate St Ives.'
Posted by David at Monday, July 19, 2010