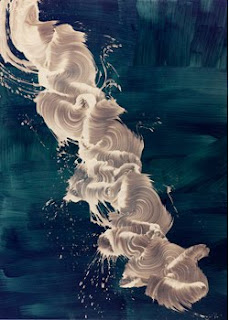 Englishman James Nares went to Chelsea in the 1970's now lives and works in the US. He has made a sling/ harness that supports himself over the canvas in order that his actions with the brush remains consistent across the movement of the canvas.

James Nares is also a well-known underground filmmaker, whose film work is comprised of a treasure trove of artistic films and videos from the late ‘70s to the present. In May 2008, the Anthology Film Archives organized a retrospective of the artist’s films, presenting 34 of his short films and videos, including Rome ’78 (featuring punk luminary Lydia Lynch in her late ‘70s prime). Michael Kohn Gallery is showing his recent work and a previously unseen early video production.
Posted by Monk at Thursday, July 08, 2010