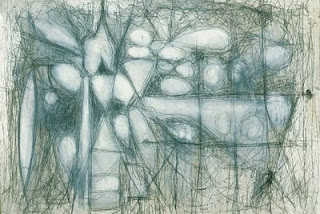 One of the youngest of the Abstract Expressionists, Richard Pousette-Dart (1916-1992) has a major retrospective at the Phillips Collection in Washington DC, USA from 5th June -12th September 2010.
We have seen in recent years, lesser critically known artists gravitate to a much higher position among the group, as we examine the legacy of Abstract Expressionists, who came to prominance in the post-WWII years, yet are viewed differently now, many years later. Consider how Rothko has become as significant if not more so than De Kooning and Pollock were at the time. You could also add Joan Mitchell and Ad Reinhardt who have had their status raised significantly in recent years.


Is Pousette-Dart another one that should be re-evaluated?
Using drawing predominantly, it falls into the same symbolist/surrealist motifs that are evident from many of the artists at the time, Gottlieb for one. These works also fall into a 'cosmic' aesthetic that leaves me cold. Yet Mark Tobey, who remains the most similar to Pousette -Dart's in approach, maintained a more objective style of painting. But we should remember that Surrealism was a large influence to many of these artists, and seeing Gorky's paintings at Tate Modern in London recently, it is easy to underestimate just how difficult a move to a more 'total' abstraction really was. 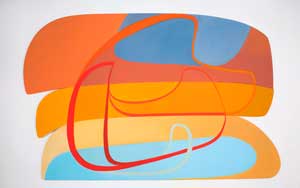 It is interesting to see the work of his daughter, Joanna Pousette-Dart, gaining prominance, she also uses drawing as a strong element in her work, there is still a trace of Miro...