A retrospective exhibition of John Cage is currently taking place at the Baltic Centre for Contemporary Art, in Gateshead, England called 'Every Day is A Good Day', from 19th June - 5th September 2010. This exhibition is showing a number of artworks, from drawings, watercolours and prints. This is an exhibition that is a celebration of his influence in the UK and Europe.
Cage has had a significant following in the UK, along with Kurt Schwitters, the ideas and processes used by both artists have been built in to the very fabric of the Britsh art school system. Cage visited England as part of his European tour in 1930, influencing students and practitioners at Dartington Hall, Devon, which along with Bath Academy of Art, Wiltshire, is the closest the UK got to the Black Mountain College where Cage was so influential. (see also the modernist building High Cross House). Dartington was also visited by Mark Tobey in the 1930's (infact both Tobey and the ceramicist Bernard Leach visited Japan together from there).

Tate Modern also has the 'Cage Paintings' by Gerhard Richter who was also greatly inspired by him.
Baltic states: 'Every Day is a Good Day is the first major exhibition and publication devoted to the entire range of American composer, writer and artist John Cage’s prints, watercolours and drawings. Cage was one of the leading avant-garde composers of the twentieth century, most famous perhaps for his silent work of 1952, 4'33".'
Also at Baltic, there is also an exhibition by contemporary artists, many British, who have been influenced by him entitled: Cage Mix: Sculpture and Sound from 29th May - 19th September 2010; with a diverse mix of processes in a number of media, this exhibition explores abstraction in its many forms. 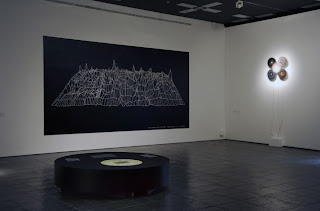 'Consistently unconventional, John Cage unravelled the rules of musical composition, re-thinking and re-presenting the score. His subversive ideas and lectures on music in the 1940s and 50s were catalysts that continue to be significant to contemporary artists working today.'

'Cage Mix: Sculpture and Sound' brings together the work of eight contemporary artists that use the writings and scores of Cage as a source of inspiration: Sam Belinfante, Graham Gussin, Christian Marclay, Jeremy Millar, Katie Paterson, Paul Ramirez Jonas, Richard Rigg and Katja Strunz.'
Posted by David at Monday, June 21, 2010