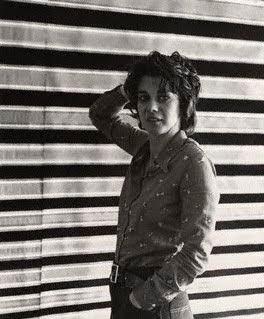 Early figurative work of Bridget Riley's is being shown at the National Portrait Gallery.  Charlotte Higgins in the Guardian writes about the progression of Riley from figuration to abstraction. The merits of life drawing in relation to abstraction is an old reassurance. On personal note I was asked to leave Euan Uglow's life class at Chelsea because my style and approach to life drawing. I wasn't too enthralled by the William Coldstream influence!

"Riley has said of the life-drawings: "I learnt to look for the structure, for the action or movement of the pose, the distribution of weight, the proportion of the body, the light-to-dark tonal scale. But the most important thing was to retain the first impressions of the whole."
Posted by Monk at Tuesday, April 27, 2010 No comments:

'Between the Possible and the Real' Contemporary Painting in Antwerp

Kusseneers Gallery in Antwerp is exhibiting 'Between the Possible and the Real' Four British Abstract Painters'. This is an interesting example of a diverse group of artists exploring contemporary abstraction in England at the moment. These four artists, Jon Thompson, Ben Ravenscroft, Andrew Graves and Andrew Bick who have been around the scene in London and the regions for a few years now have branched out with this exciting show in Belgium. 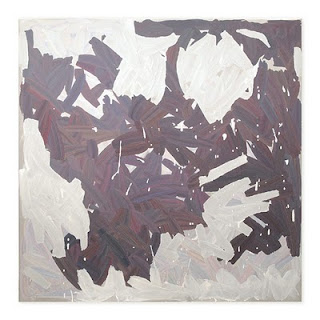 Acrylic on Aluminium, 2004,
150x150cm
(Thanks to Re-Title and Kusseneers Gallery for the information and images.)

There is a diversity of the processes used by these painters, with references that could refer to the influence of Minimalism as well as Abstract Expressionist qualities, where surface and gesture predominate. But most importantly, it is the fact that these works are seen together as a group, attempting to redefine the plurality of styles painting holds in contemporary art at the moment. 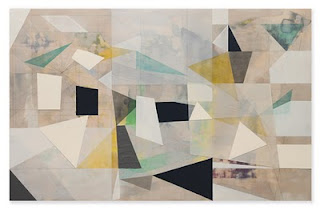 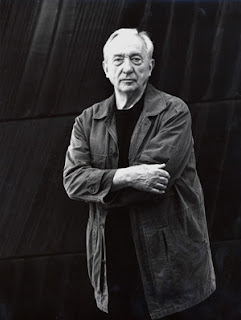 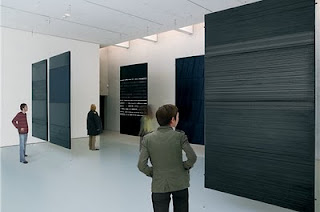 A good friend gave me a book on Pierre Soulages when I was about 22 years old and was captivated by the luminance of his paintings. He managed to use techniques of paint application that I associated with tricksy holiday resort painters that knock up a harbour scene with sky, sails and clouds in a few palette knife strokes. The difference in sensibility skill and observation though was obviously vastly different. There is a distinctively French elegance to his painting when regarded alongside American painters that have created light emerging from the space in the painting. He has always managed to combine invention of drawn form painting depth and rich surface.  I haven't seen his work for a number of years and was thrilled to see he is as acute and accomplished as ever. These recent works for me connected Soulages to Florian Plumhosl, whose minimal black and white installation was one of the highlights at Documenta, taking me into Europe not west. These are contemporary paintings from an artist that hasn't rested. The effect is similar to Jason Martin's but the technique is not the deconstructed subject.

He was born in 1919 and was emerging in the 40's when "The fall of Paris" was happening and subsequently when abstract expressionism was named as a movement. He then showed in New York in 1951.

I feel a sense of recognition when seeing his work and feel I am chasing his tail.

You will also find videos and interviews with him in connection with his show at the Pompidou centre in Paris. 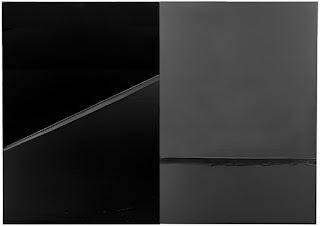 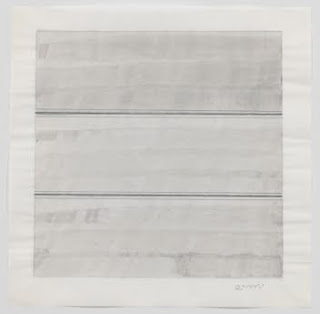 In dj remix terms (what pop terminology here!) USA Vs Ireland. Agnes Martin opens at the Timothy Taylor creamery. I was however questioning over their statement that she was one of America's foremost abstract painters. Yes if being forced to run on the outside lane and coming in 9th in a 10 lane race is foremost, or if being the last one standing makes you foremost then Agnes Martin is. This niggle aside there is a delicate sensitivity that is like a breath in her work. Tender and not a strained muscle of runner in the whispered paintings and drawings. 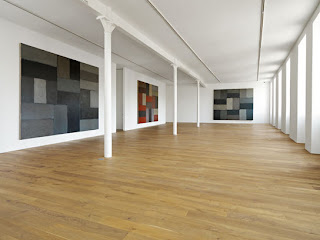 Sean Scully is Finn McCool in contrast. His exhibition at the Ingleby of the Iona tryptych looks commanding and the smaller work make the blocks feel like I've zoomed in on Cezanne brushmarks. Sean Scully will be showing later this year at................ Timothy Taylor. 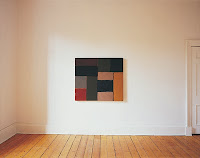 Otto Zitko and Louise Bourgeois at the Arnolfini 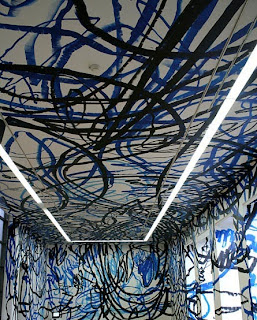 Otto Zitko is one of many artists taking the painting off the canvas. I have painted rooms, two of which were titled Holy Moses (1999) and Many Hands (2001) in tribute to Aung San Suu Kyi and her husband Dr Michael Aris. A favorite off canvas painter of mine is Katharina Grosse. Zitko is also among a few painters with an innate affinity for string theory and a blood line to Pollock and the later works of De Kooning ( much maligned but rated by me ).  The images I have seen do not convey the invention in the line the skips and and jumps, the changes in density and width that Otto achieves. There is a freedom in the line that contains the viewer which I don't think was an intended irony.

The invitation to the preview has a wonderful Louise Bourgeois drawing on it that I will scan and post later.
STRING THEORISTS:  De Kooning, Peart, Cockrill, Lohr

This type of wandering line unifies and leads the eye and is often used to define another plane. Because it is effective in doing this it can be used lazily. It prevents decisions on form and becomes devisive. It can be varied in scale and colour giving the appearance of invention but is production. I trust you will now spot stringers and if so please send suggestions through.

Thanks to Undercover Painter for the image correction.
Posted by Monk at Friday, April 16, 2010 1 comment: