Wow the Americans believe and commit. A general observation perhaps but it can be seen from the activity in the United States that abstraction is not only breathing it is running. And it would seem that there are cheerleaders from all sectors waving flags and cheering it on. I am envious of how integral it seems to be and of the corporate support it attracts.

The US Postal Service has released a set of stamps that celebrates Abstract Expressionism. A miniature exhibition in 44c stamps has been curated by Ethel Kessler and historian Jonathan Fineberg. Each stamp includes the artist’s name and verso text that identifies the painting and briefly tells something about the artist. 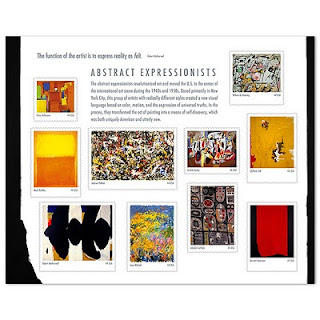 Here is the List of works:List of Stamp Artwork

It is interesting that Franz Kline is missing from the set, who according to The Times top 200 most popular artists is more valued than Robert Motherwell. ( Surprisingly Van Gogh didn't appear anywhere in the list.) I personally would have liked them to have included Philip Guston in the collection of stamps but perhaps his later works excluded him.

Still despite these omissions this is a delightful set of stamps. 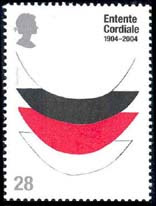 In a more modest way the British have in the past used abstract painters as in this example using Terry Frost to promote Entente Cordiale.
Posted by Monk at Thursday, March 11, 2010