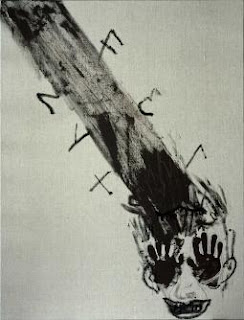 If Tapies can be categorised as a 'Fiddling Rustic' I will eat Joseph Beuys's hat. If he is considered an 'Old Jazzer' I'll eat George Melly's hat.

I have copied this from the press section of the foundation's website:

" Antoni Tàpies. The Places of Art

The Fundació Antoni Tàpies will reopen with Antoni Tàpies. The Places of Art, an exhibition that includes works realised by the artist in the last twenty years (to coincide with the two decades of existence of the Fundació), and a selection of earlier works acting as counterpoints (namely works from the mid-forties) that can be seen as the seeds for his later production. 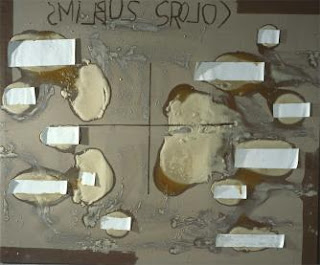 The exhibition will also include a selection of works from the artist’s private collection, a fragment of what he himself has named his ‘manifesto’ and his ‘museum’ [Antoni Tàpies, El arte y sus lugares (The Places of Art), Madrid: Siruela, 1999].

This selection includes works ranging from Egyptian art to modern Western art, from ritual objects to scientific books, which are not only the habitat of the artist but are also linked to his particular way of conceiving art, and represent a heterodox questioning of its origins, history and meaning. The selection brings together pieces that have rarely, if ever, been seen in an exhibition space. "
Posted by Monk at Thursday, March 04, 2010