Carmen Herrara in Pfalzgalerie in conjunction with the Ikon gallery

I have translated the text from the Pflazgalerie website using online translation so there are a few curiosities ( Gentleman- race work! ) but for those of us that don't read German hopefully it will be more accessible than linking to the website. Or alternatively you can visit the Ikon site and read the text for the exhibition they held last year. 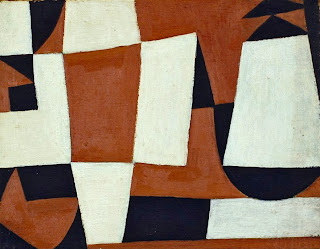 The museum Pfalzgalerie Kaiserslautern shows the first retrospective of the work of the American artist Carmen Herrera with this exhibition - to be presented altogether 55 work from the period between 1948 and 2007 - in Europe, organized in co-operation with the Ikon Gallery in Birmingham, England. Despite its contacts to well-known and influential artists and the outstanding quality of their work Carmen Herrera issued relatively rarely. By this extensive exhibition you experience so far too little well-known work the being entitled attention. Sculpture Carmen Herrera venetian talk, White and black, 1949 The artist is born 1915 in Havanna, Cuba, and lives since 1954 in New York. After a study of architecture to the Universidad de La Habana it received its artistic training 1943-1947 at the kind Students League in New York. 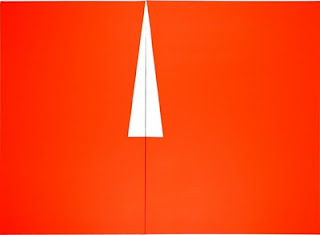 To their there circle of friends bar-nicely Newman and Wifredo Lam belonged. A longer stay in Paris from 1948 to 1953 brought the stylistic development of its work of gestischen abstraction to the French postwar art to stringenter formal attitude. From 1954 to again in New York, Carmen Herrera created an outstanding concrete work, which is consistently dedicated to the ungegenständlichen art over a half century. It concentrates for the early 1950er years on pure geometry - line, color, surface are the formal elements, whose autonomy justifies its own aesthetic reality. Their works are the result of harmony and tension of opposite color surfaces, which give aliveness to the surface. With reduced means negative-positive forms and optical rhythm are obtained by large complexity. Gentleman-race work of the 50's reaches often in surprising way already the artistic developments of the 60's into the range that minimum kind and the hard Edge ahead. Sculpture Carmen Herrera Amarillo, 1971 The project adds itself into a set of exhibitions of the museum Pfalzgalerie, which was dedicated to American artists, mainly the abstract expressionism. Carmen gentleman-race work opens the view of those in this country for few admitted non-European variants of concrete-constructional art, here in particular on the Latin American contribution. To the exhibition a catalog is published published Buhlmann, Jonathan Watkins, Carmen Juliá and Juan Ledezma, from Nigel Prince, with numerous illustrations as well as texts of Britta E. extent 84 sides, price 30 euros, ISBN 978-1-904864-54-7.
Posted by Monk at Wednesday, March 17, 2010