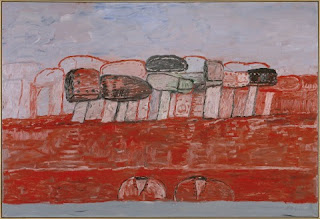 It seems that it is only in America that there is any serious attempt to define the significant changes taking place in abstraction in the last twenty five years. There is little evidence in Europe, of a dialogue that is questioning or at least attempting to redifine the role abstraction and especially abstract painting has and can play in our present culture in the 21st century. We still seem to be looking back and even though there are much wider and more ecclectic styles being used in abstraction, is there sufficient depth to their significance? How do we view todays art? Is it still post-modern?, is it still relying on its reaction to modernism for its significance? Looking forward, I want to know what abstraction can do on a much wider scale and I want it to break free of its historical constraints, just as it did 100 years ago through the work of Malevich, Mondrian and other modernist pioneers, where abstraction seemed to have a deeper significance to the artists involved... 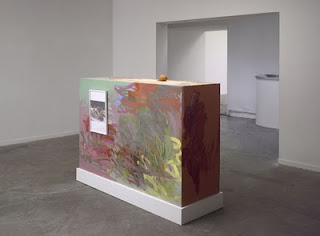 However, this show at the Walker is attempting to define something new: 'Now-legendary figures as well as younger artists who have revolted against the aesthetic orthodoxies of their times are featured in the Walker Art Center exhibition Abstract Resistance on view February 27–May 23. Nearly 40 works ranging from the 1950s to a brand-new commission do not conform to a single theme, but are united in challenging what is expected of art, from the way it looks to the role it plays in society at large.
The exhibition considers “resistance” as a complex formal and political force, as is suggested by the title it borrows from a featured sculpture by Thomas Hirschhorn. Ultimately, Abstract Resistance proposes an alternative framework for aesthetically inventive, ethically engaged, and politically defiant art. The exhibition, drawn mostly from the Walker’s collection, highlights works in assemblage, collage, and photomontage by Francis Bacon, Lynda Benglis, Anthony Caro, Sarah Charlesworth, Bruce Conner, Willem de Kooning, Lucio Fontana, Hollis Frampton, Philip Guston, Rachel Harrison, Hirschhorn, Ellsworth Kelly, Paul McCarthy, Robert Motherwell, Bruce Nauman, Cady Noland, Charles Ray, Gedi Sibony, Kara Walker, Andro Wekua, and Cathy Wilkes.'
In my view this exhibtions limitations are that they have only drawn from works existing in their collection, however, this in itself is impressive. But also they have a broad remit that includes photography, sculpture/installation as well as painting. It is also a diverse grouping of artists, both those that have a historic resonance and significant contemporary artists. Perhaps it is seeking not only to define art that has been made recently, but to suggest other ways to view abstract art in a much wider context. It is here that I believe a way forward can be constructed, a new framework built upon. More than anything, the curators have sought to not focus and dwell upon the movements, ideologies and theories that the artists emerged from in their early careers and became known for, but to redefine what the works can mean. Let me know what you think?
A review from The Star Tribune on 4th March, 2010:
'Walker's "Abstract Resistance" reflects harsh realities/The exhibit turns an uncompromising eye on contemporary society.... 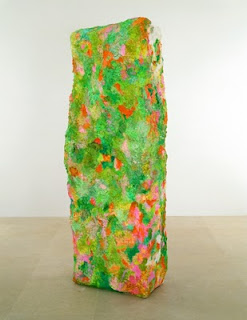