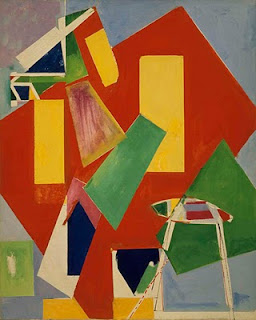 This show at the Philbrook acknowledges Hans Hofmann's influence on a number of American abstract painters. The press release mentions his essays 'Search for the Real' - 1948 in which he declares his view that the 'Real' is found in the object and the aesthetic. There being no difference between the physical thing and its image in respect that they are both real. The mystical significance of this mercurial combination is integral to painting and is revealed in the push and pull of form/colour on a flat surface. It is this that captivates and provides us a glimpse at reality that cannot be spoken of but has to be seen. So easy to write about so very hard to achieve. For Hofmann the combination of the physical with the conceptual is the pinnacle of art achievement and was achieved in his eyes by very few. With this we can agree but most have lists that extend beyond his of Picasso, Matisse and Braque. (Hans Hofmann  being more akin to Braque in his relation to Pollock.) There is an energetic exploration in Hofmann's work that is beyond a frantic seeking of a signature and style. His creativity is evident in the faltering works that sit on the canvas unapologetically. Splendid creativity, recognising that in continuing to ask questions you are bound to find a few wrong answers. He wasn't the exploiter of his own mining.
Posted by Monk at Wednesday, February 24, 2010