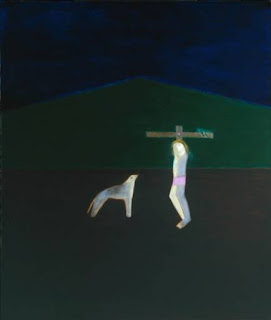 Craigie Aitchison was a visiting lecturer when I was at Chelsea School of Art. He was always very quiet, gentle and disarming. Like his paintings he gave a sense of being delicate but this belied a strength. Frequently he was accompanied by his Bedlington terrier and the most beautiful models. His work was clear, distinctive and poetic.

Guardian obit with pictures!
Posted by Monk at Wednesday, December 23, 2009 No comments:

Why is it that so many obituaries of artists fail to show examples of their work? After all usually the work is visual, usually art has been a life time occupation, frequently it is defining of the person and reading obits is a visual activity. Not only do they not illustrate the art but they flatter themselves by describing the works! Here is an example in The Sydney Morning Herald acknowledging the life of Hungarian abstract painter who has died at the grand age of 105 Tamas Lossonczy. Here are examples of his paintings: 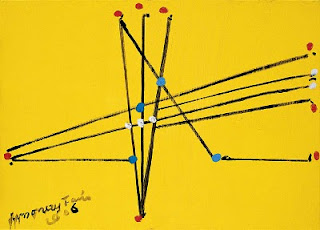 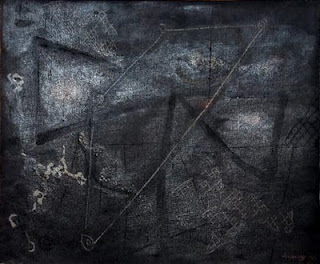 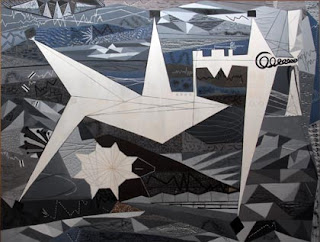 Images courtesy of http://www.gimagine.com. Sadly there were no titles or details available!
Posted by Monk at Tuesday, December 22, 2009 No comments:

Hold on by your fingertips 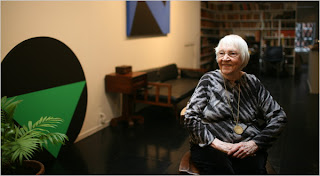 The Cuban-born artist Carmen Herrera in her Manhattan loft, surrounded by her art. After six decades of very private painting, she sold her first artwork five years ago at the age of 89.
"Paintings speak for themselves," Ms. Herrera said. Geometry and color have been the head and the heart of her work, she added, describing a lifelong quest to pare down her paintings to their essence, like visual haiku. Shown here, "Blanco y Verde" (1966), a canvas of white interrupted by an inverted green triangle. 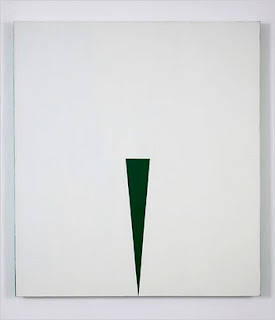 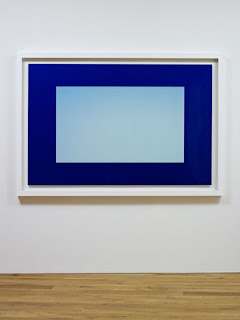 Garry Fabian Miller is one of a small band of international photographers who investigate the possibilities of camera-less
photography (the interaction of light and light-sensitive paper). Miller continues to push the boundaries of photographic
possibility into the 21st century whilst always keeping one eye on the past and, in particular, on a lineage that dates back to
the first practitioners of the art (and science) of photographic experiment in the 1830s and ‘40’s.
The results are unique, one-off prints that condense light and colour into spectacular images. However, the delicate
balance between the art and science of these methods has come into clear focus in the past few years as the all important
‘science’ of the raw material – light sensitive Cibachrome paper - has come under threat from the digital age. Artists such
as Miller have had to stockpile materials and re-think their practice as the manufacturers of their precious paper go to the
wall.
Armed with the knowledge and experience of old methods that can’t be replicated, Miller has risen to the challenge,
feeling his way forward and building a bridge into a new and principally digital world. The resulting work suggests an
evolutionary moment, sharing the values of historical knowledge with the potential of the future. These photographs will
take their place in Shadow Catchers, a major survey of camera-less photography at the Victoria & Albert Museum, in
November 2010. Ahead of this they will be shown for the first time at Ingleby Gallery in November and December this
year, under the collective title The Colours.
They are remarkable photographs, embracing the possibilities of pure, liquid colour on a large scale and using the new
printing technologies to restore the intensity of those first experiments in Cibachrome of 30-40 years ago. Their starting
point was 2 years of intense studio based practice – referred to by Miller as Years One and Two – that collated all of his
accumulated knowledge into a kind of pattern book of ideas for the future. We will be showing groups of small-scale
works from Years One, and Two alongside the new large format images.
Ingleby Gallery
Posted by Monk at Monday, December 21, 2009 No comments:

Nick Moore at the Brewhouse

Dark Intervals is a series of paintings exploring a new-found energy which embraces the combined elements of chance and deliberation, application and reverie. They are rooted in spontaneity and improvisation, akin to what John Cage described in music as ‘considered improvisation’.

Nick Moore is a painter, musician and poet based in Bristol. He is a teacher and lecturer in both art and art history and has worked on graduate and post graduate levels. He is currently artist in residence at a GP Surgery in Gloucestershire as part of the Art Lift project.
Posted by Monk at Thursday, December 10, 2009 1 comment:

In a verbal society, most people are "Form Blind",...

'If anything in the world can teach a man to venture, it is the ethical, which teaches to venture everything for nothing, to risk everything, and also therefore to renounce the flattery of the world - historical... " Soren Kierkegaard.

Venturesomeness is only one of the ethical values respected by modern painters.
There are many others, integrity, sensuality, sensitivity, knowingness, passion, dedication, sincerity, and so on, which taken all together represent the ethical background of judgement in relation to any given work of modern art. Every aesthetic judgement of importance is ultimately ethical in background. It is its unawareness of this background that is an audience's chief problem. And one has to have an intimate acquaintance with the language of contemporary painting to be able to see the real beauty of it; to see the ethical background is even more difficult. It is a question of consciousness.
........Without ethical consciousness, a painter is only a decorator. Without ethical consciousness, the audience is only sensual, one of aesthetes.

Robert Motherwell extracts from 'The Painter and The Audience' 1954 Perspectives USA UCP Berkeley
Posted by Monk at Wednesday, December 09, 2009 1 comment: 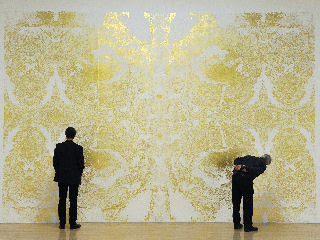 Richard Wright a painter and guitarist for Correcto has won the Turner Prize. Image courtesy of ITN

Timothy Taylor will be showing works on paper by Phillip Guston. 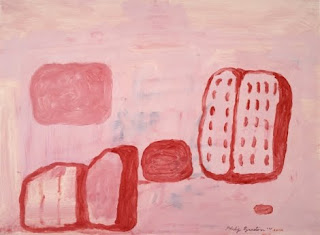 and Rothko hits the stage at the Donmar in REd.
Posted by Monk at Tuesday, December 08, 2009 No comments:

The painter Richard Wright, who creates ephemeral abstract paintings, drawings and designs wins the Turner Prize 2009 today. Is this ushering in a more subtle and deeper understanding of the role abstraction can play in contemporary art and culture? 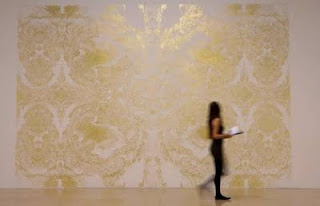 Read the review in the Telegraph: http://www.telegraph.co.uk/culture/art/turner-prize/6753775/Richard-Wright-Turner-Prize-2009-winner.html

Here are two articles recently posted on the internet discussing abstraction. I am interested in these writings because of the perceptions of abstraction in a wider context, how it operates and then how it relates to abstract painting. I think these perceptions and where they originate from can affect the reading of abstract images. I have started to write a response to these but in the mean time you might care to take a look.

http://medicalhypotheses.blogspot.com/2009/11/clever-sillies-why-high-iq-lack-common.html
http://timsmartt.wordpress.com/2009/11/30/philosophy-101-2-the-difference-between-abstraction-and-idealization/
Posted by Monk at Wednesday, December 02, 2009 No comments: 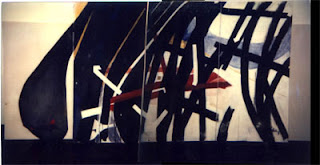 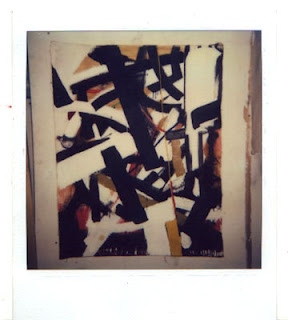 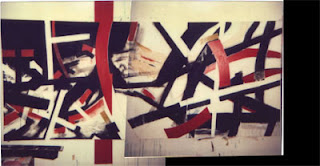 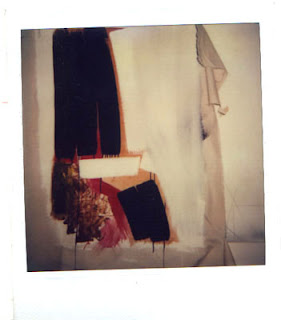 I thought you might be interested in these polaroids that I recently rediscovered. They are of paintings I made nearly 30 years ago whilst at Chelsea. Sadly I don't have better images of them and I don't have a record of the titles.
Posted by Monk at Wednesday, December 02, 2009 No comments: 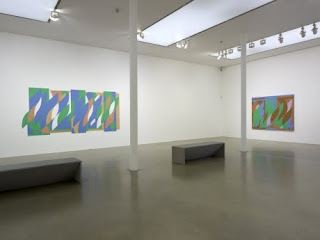 Bridget Riley opens at Timothy Taylor. Tom Lubbock asks the pertinent questions
"Why this solemnity about shapes and colours? Why this obsession with purity?"

Bridget Riley’s new paintings are clean, bright, hopeful and full of movement. The simpler forms that Bridget Riley is drawing out and the push me pull you tradition in the images attract me but I still find the process and style to harsh and impersonal. They are honed but not comparable to this Spanish Elegy by Robert Motherwell. 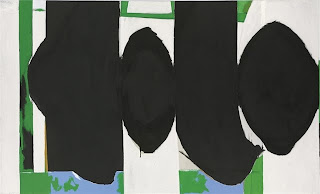