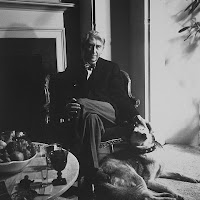 Herbert Read arguing along with Adolf Loos and others that mass consumption required the principles of aesthetics to be "restated", declared- "For the real problem is not to adapt machine production to the aesthetic standards of handicraft, but to think out new aesthetic standards for new methods of production."

Given that production and consumption is going to change radically this is most definitely a pressing challenge. He was idealistic in his ideas about planning the urban environment believing that aesthetics and function would be a driving factor in the designs and construction of them. For a long time I also believed that major constructions would be driven by the social welfare and its improvement. The realisation that it was being driven by greed and the desire to offset risk illustrated what little progress had been made and how little value is placed on aesthetics over function. The assumption is still rife that this model is king and will create good design, good art, good cities. Good citizens? For this to be true the function has to be scrutinised and changed.

"In other words, what is required as a preliminary to any practical solution of the division existing between art and industry is a clear understanding, not only of the process of modern production but also the nature of art. Not until we have reduced the work of art to its essentials, stripped it of all the irrelevancies imposed on it by a particular culture or civilisation, can we see any solution of the problem. The first step, therefore, is to define art; the second is to estimate the capacity of the machine to produce works of art."

Art and Industry - 1934 Herbert Read, as a disciple of Walter Gropius, was all for aesthetic analysis of works of art; what is the work that art does? what works in the art?, and why does it work?.

"In order to create it is necessary to destroy; and the agent of destruction in society is the poet. I believe that the poet is necessarily an anarchist, and that he must oppose all organized conceptions of the State, not only those which we inherit from the past, but equally those which are imposed on people in the name of the future."