In thinking about the re-emergence of hard-edged abstraction Philip Guston's dilemmas and the sovereignty of the rational came to mind. 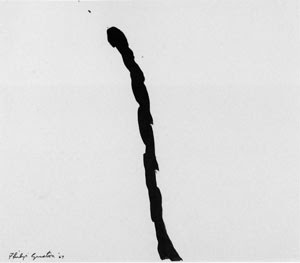 “ There is something ridiculous and miserly in the myth that we inherit from abstract art- that painting is autonomous, pure and for itself, and therefore we habitually defined its ingredients and define its limits. But painting is “impure”. It is the adjustment of impurities, which forces painting’s continuity. We are image-makers and image ridden.” Philip Guston 1960.Image source Philip Guston Retrospective Royal Academy of Arts

Guston struggled with the desire for an openness that abstraction brings and the primitive impulse for the recognition of object. He felt at a loss in the face of the presumed “ultimate” style. In the face of this he was drawn by his need to communicate directly and implicitly despite having acknowledged that the recognisable form “excludes too much” and that “ there is no such thing as non objective art. Everything has an object. Everything has a figure. The question is what kind?”
In response to Guston’s figuration the critic Rosenberg said “ the ‘scandal’ of the Marlborough exhibition is not that this leading abstract expressionist has introduced narration and social comment but that he has done his utmost to make problems of painting seem secondary.” “Painting needs to purge itself of all systems that place the so-called interests of art above the interests of the artist’s mind. …it is time now to liberate it (abstract expressionism) from the ban on social consciousness.” Are we really there again? Or is the formality of reduction an appropriate response?

Dore Ashton made the link between Guston’s comment and Goya’s dislike of artist’s that ‘aped’ nature without question. He then qualified the parallel drawn “ If you read “reason” as the governing power of skill, craft, memory, knowledge, there is no good painter without it.” This monkey business is rife.
“ There are people who think that painters should not talk. I know many people who feel that way, but that makes the painter into some kind of painting monkey.” Guston
(“Talking about painting is like trying to taste music.” Picasso)

I have an aversion to art that pretends to be delivered through scientific analysis, which feels it cannot justify its activity and production unless it is validated by process established in science or fulfils some rational administrative brief. This is inclined to produce cool art and also produces monkeys responding to the peanuts dropped through the cage. Empirical data is not the same as knowledge. Intellectual ability is no guarantee of rational-thinking. Reductive rationalised art runs the risk of being dogmatic and purist, whether it is abstraction or figurative realism. Taking and defending a stylistic stance runs the risk of being habitual, repetitive and dull. Being random and not sustaining a focus runs the risk of unrealised ambitions. I am inspired when I can witness both the random and the rational in a work of art. This combination is rare more so in reductive thinking as the context increasingly narrows. Ref: Michael Bond New Scientist 31 October 2009. In his book On Creativity, the extraordinary David Bohm, expressed his desire for rational participation (This book provided me with the title and text for In Theory, Churchill House, Bath, 2001.) In seeking a solution to different realities he hopes for a common consciousness that withholds judgement thereby establishing a new intelligence. This poignantly would affect the relation between Newtonian and quantum models as well as abstraction and figuration, the inside and the out. A reservation on this vision is that surely judgement is required in all disciplines so at what point is it applied? And everyone “seeing the same thing” is not likely to be a creative scenario. God and Darwinists favour diversity and variation and are we not already very predictable. (New Scientist They Know What You’re Thinking 31 October 2009 & Horizon The Secret You Professor Marcus du Sautoy 23 October 2009) Having us all run through the same maze would make us more so. Perhaps I perceive the rational of these proposals as prescriptive when they are not.

“Certain artists do something and a new emotion is brought into the world; its real meaning lies outside of history and the chains of causality.” Guston

There is an ethical aspect to making art but there is no ultimate image or style, no final solution. If there were would we not have stopped at Giotto or Rembrandt?

Participation and an holistic approach are ideals that have given rise to the good and bad. Rationality and logic has and can excuse the awful as well as the good. Perhaps there will be managed means by which we can all get stimuli that satisfy us. As long as there is a long enough gap between the repeat of the cycle that prevents us from being dulled to the stimuli then………………we can go on rediscovering America. Hahaha.

It was stated in Ars Electronica 1979- 2004 the first 25 years Hatje Cantz for Ars Electronica 2000 -
‘Individual WAP access, consequent to the UMTS standard, is not only the great hope of the IT branch but also focuses digital development on the individual, on individual independence of location, the freedom of every single person. No matter where I am, I can participate in nearly every area of life, business, entertainment, leisure time, culture, in the networked world” “ This generation will become the bearers of global culture, a global culture characterised by the individuality of each person and independence of time and place.” Anders Eriksson of an ecommerce company is quoted as saying “ We think and breathe digital our soul is digital.”

The platform for Bohm’s vision is being established and the Open Source ideology is integral to operations and spreading. I am not certain where the freedom lies with it. It feels as if we are just staring at shadows. However the brilliant invention Autonomy struck me as being the closest to providing the most natural illusion of freedom and control in the experience and management of unstructured data. “More than 80% of all data in an enterprise is unstructured information. This encompasses telephone conversations, voicemails, emails, word documents, paper documents, images, web pages, video and hundreds of additional formats. Unfortunately, attempts to leverage this immense and strategic resource often fail because many businesses lack the requisite technology to understand and effectively utilize content that resides outside the scope of structured databases.” I approached Autonomy years ago in the hope of utilising their software to produce art. It seemed obvious to me that you could replace the word businesses for artists. No they are not one and the same.

The theme for this year’s Ars Electronica festival was Human Nature. Here is a section from their festival description, The Reinvention of Nature. "We’re using innovative high-tech methods to observe the human brain while it thinks, so that we can now look behind the veil of our consciousness and see how our mechanisms of perception and decision-making capacities are reflected in our neurons. The long-established boundaries segregating nature and culture are breaking down, and we are once again confronted by the question of the essence of humanness and the nature of the human being."

By way of a conclusion on this passage on abstraction, figuration, openness, participation, painting and digital developments: I have yet to feel “strange” (Guston) in response to digital technology in the way that I do in front of a painting. Paul Granjon in his performances highlights the fallibility of this relationship with technology for me, slightly absurd and disconcerting but not strange. Part of the discomfort is the imposition of engagement and the motivations that are driving its implementation. The strangeness of painting hits at the core. Our relationship with it is not anachronistic but essential.

“Freedom: dada, dada, dada, crying open the constricted pains, swallowing the contrasts and all the contradictions, the grotesqueries and the illogicalities of life.” Tristan Tzara (Dadaism Dietmar Elger Taschen)

Just heard on Radio 4 “ The trouble with ceramics is that it is trial and error.”