Ann McElvoy recently interviewed Anish Kapoor for Radio 3. Anish Kapoor started off with a statement that I felt he then went on to contradict. "I am not really interested in composition. In fact I am not interested in composition. I am interested in conditions of matter". He also said. "Composition is of course putting one thing next to another. What the work declares very clearly is that there is no juxtaposing." I was amazed that he declared this particularly as he then moved on to describe the decisions in the formation of the works and that he had made with the installation of the works in the RA galleries. "I have chosen a very particular material and a very particular colour and is hugely associative." My appreciation of composition is that it informs, gives direction to, heightens communication and occurs in the placement of work in a space as well as the decision on what scale a work is going to inhabit and he is interested in scale. He went on to explain, "(The work) is full of meanings that arise out of the process and that is what I am interested in. Abstract art, generally is good at meanings that are somewhat under the skin and those are the meanings that matter I think, rather than a more figurative art where the meaning sits alongside an image. It's a coming to content rather than the revealing of meaning." He draws comparisons with action painting and recognises, a relevant and contemporary point, that any mark made is an act of aggression. I liked his final description of his desire to be radical, his appreciation of the RA in allowing him to smear the galleries with coloured Vaseline and his belief that such disruptions and 'slight discomfort' give rise to a meaningful moment. For me herein lies the contradiction as this discomfort comes about through the juxtaposition of the material and the surroundings. 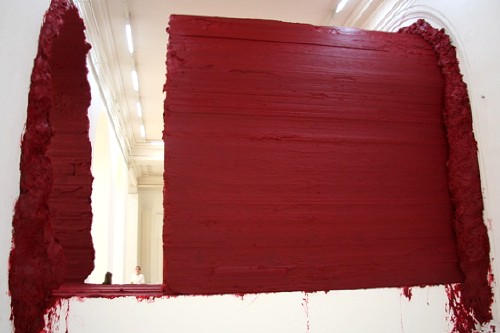